Dams occupy a very pivotal role in the development activities of the civilization. Dams also pose a hazard in the event of their failure. Odisha has 163 large dams, out of these 26 dams have been identified for rehabilitation and improvement works under DRIP by the Odisha Water Resources Department (OWRD). 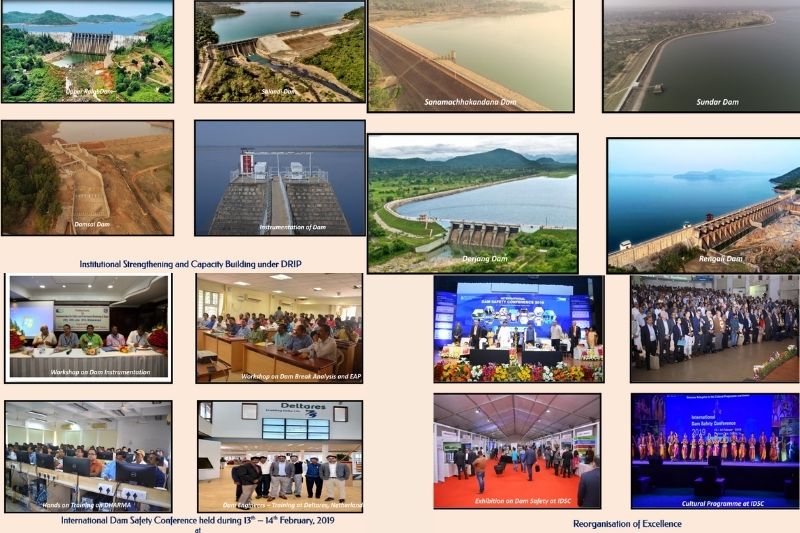 Dams occupy a very pivotal role in the development activities of the civilization. Dams also pose a hazard in the event of their failure. Odisha has 163 large dams, out of these 26 dams have been identified for rehabilitation and improvement works under DRIP by the Odisha Water Resources Department (OWRD). Restoration of the 38 dams along with activities of Institutional Strengthening and Project Management in OWRD is proposed to be covered under the DRIP at a revised estimated cost of Rs. 751 Crore. The objective of the project is to improve the safety and operational performance of selected existing dams and the appurtenant structure of the state. The project focused on structural and non-structural measures which include improving the ability to withstand higher floods including additional flood handling facilities, rehabilitation, and improvement of spillways. The wholesome instrumentation has been taken up in the dams to measure various parameters for the effective implementation of safety measures.

According to a United Nations (UN) report “Ageing water infrastructure: An emerging global risk”, over 1,000 large dams in India will be roughly 50 years old in 2025 and such aging embankments across the world pose a growing threat. With the average annual cost of floods in India estimated at US$7.4 billion, many dams are critical in mitigating floods. Their failure could pose serious risks to downstream communities. Few dams in Odisha exhibit structural deficiencies, if a dam is not maintained well, there are chances for it to collapse. Hence, to mitigate the risks of dam failure it needs to be operated correctly.

This Scheme Dam Rehabilitation and Improvement Project (DRIP) is implemented which specially focuses on mitigating the risks of dam failure and ensuring the safety of people, riverine ecology, and property located downstream of the selected dams. CWC (Central Water Commission) has installed geotechnical, geodetic, hydro-meteorological, and seismic instruments in old dams under the DRIP program.

The project has undertaken tasks such as raising the height of the dam, and rehabilitation of spillway, and conveyance system. It also prepared the Dam Break Analysis, Emergency Action Plan, and O&M Manual for DRIP Dams. Additionally, it provided national and international level training programs for the capacity building of young engineers.

The government’s flagship program Dam Rehabilitation Improvement Project (DRIP) has improved large dams’ safety and operational performance while ensuring environmental protection. The project published the Emergency Response Plans that were duly approved by competent authorities. The efforts resulted in effective utilization of stored water and improved performance on a long-term basis with reduced risk of failure. Furthermore, the project dams are registered and the data is uploaded to the Dam Asset Management System. Also, it operationalized the project dams with a need-based O&M plan. The project ensured the rehabilitation of the dams in the state and they are now maintained well enough for their proper functioning in the future as well.

The department faced issues related to rehabilitation and resettlement during the execution of the Additional Spillway of Hirakud Dam.

DHARMA, a web-based dam inventory management software has been developed. Dam Health and Rehabilitation Monitoring Application (DHARMA) is a web-based asset management software to support the effective collection and management of asset and health data for all large dams in India. Efforts are being made to capture the dam health-related data on this platform. As of today, 76 percent of data has been uploaded by Odisha. Also, the project enabled automation of the spillway gates which is a remarkable achievement. Additionally, various workshops and training have been conducted in Bhubaneswar. Engineers of the state have attended national-level workshops on dams. Engineers of the state also attended international study tours and training at Deltares in Netherland and USBR in Denver, USA.

Acknowledging the success of DRIP, Dam Protection Improvement Works (DPIW) is being created to meet the specific maintenance required for the dams. This is the first of its kind project in the country. Odisha state also plans to participate in DRIP-II funded by the World Bank for the rehabilitation of specific dams. The department has planned sustainable peripheral development activities like water sports, museums, etc. at the reservoir sites to attract tourism.

The objective of the project has been achieved through the successful implementation of rehabilitation work by which many significant deficiencies of dams have been adequately addressed. State-funded DPIW scheme has been created to rehabilitate the dams which require immediate intervention. The stakeholders are properly sensitized to know about their roles and responsibility in case of Dam failure. DRIP has been successful in bringing together dam owners, engineers, scientists, academicians, industries, and World Bank as well as renowned dam safety professionals. The department achieved its vision of a future in which the public safety, economic strength, environment, and national security of the nation are not threatened by the risk of dam failure.