Impressive initiatives in Urban Development, Municipal Sanitation, Health, Police & Safety and e-Governance have helped Uttarakhand make strong improvement in its standing in the annual SKOCH State of Governance Rankings 2020. The state jumped to the 13th place in 2020 ranking from the 21st spot, the previous year. Top Gainers Uttarakhand registered significant gains in… 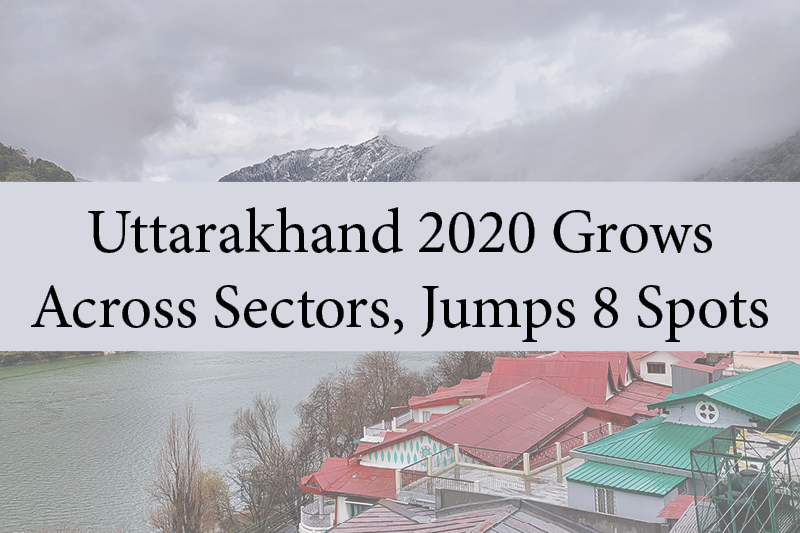 Impressive initiatives in Urban Development, Municipal Sanitation, Health, Police & Safety and e-Governance have helped Uttarakhand make strong improvement in its standing in the annual SKOCH State of Governance Rankings 2020. The state jumped to the 13th place in 2020 ranking from the 21st spot, the previous year.

The highest number of projects in Municipal Sanitation category were studied from Uttarakhand. There were eight projects selected in this category from the state. Out of these, one project was in the impactful category. Andhra Pradesh topped this sectoral ranking with seven projects. One project from Andhra Pradesh was in highly impactful category that helped the state secure the top spot.

Nagar Palika Parishad Munikireti has done impressive work in Solid Waste Management and making the city clean. The urban local body is working on the principles of Reduce, Reuse, Recycle and Recover. It has run special drive to create awareness among the general public waste management. The has set a target to achieve ‘zero waste management’. To achieve this, citizens are motivated to do individual and community composting. Nagar Palika Parishad Munikireti has set up segregation plants for effective waste management.

One major change that Covid-19 pandemic has brought in the work culture is ‘Work from Home’. The government firms have also come forward to promote this culture. Urban Development Directorate, Uttarakhand, has implemented IT-based solution e-Office which allows its employees work freely from their home. The new solution has features to track records. It leads to enhanced transparency and productivity. Paperless filing helped to keep records by just ‘click and track’ which eventually eased movement of files and workload. Files are organised in such a manner that can search and track efficiently.

Urban Development Directorate, Uttarakhand, has adopted a decentralised solid waste management model. Under this initiative waste is categorised in 4 major categories – wet, dry, domestic hazardous and domestic bio-medical waste. Further recyclable waste is segregated into 30 categories based on their characteristics and value.

To provide 24×7 pan India market for NULM Women SHGs Urban Development Directorate of Uttarakhand has implemented e-commerce initiative. The new initiative involves buying and selling of goods and services, or the transmitting of funds or data, over an electronic network, primarily the internet. These business transactions occur either as business-to-business (B2B), business-to-consumer (B2C), consumer-to-consumer or consumer-to-business.

Uttarakhand secured the fourth position in Governance (General Administration) category with one impactful project. Tamil Nadu topped this sectoral ranking with two projects. One of them was in highly impactful category.

With one project Uttarakhand is placed at the 11th position in e-Governance category. Telangana topped this sectoral ranking with six projects that were studied. Three projects from Telangana were in the impactful categories. Madhya Pradesh and Uttarakhand jointly shared the 11th position in e-Governance sectoral ranking as only one project made it to the tally from each of the state.

Department of Information Science and Technology, Government of Uttarakhand, has taken initiatives to promote research and development in the areas of Unmanned Aerial Vehicles (UAVs – Drones). The initiative has been spearheaded by Drone Application And Research Centre (DARC). In addition to drone mapping software DARC has developed a multi rotor drone. Drone pilot training has been imparted by DARC to personnel including Directorate General of Civil Aviation (DGCA). DARC is also assisting Ministry of Electronics and Information Technology for national strategy paper on drone technology.

National Health Mission, Uttarakhand, has implemented an effective monitoring and follow-up mechanism for health services through 104 helpline system. The Call Centre is an important communications link to beneficiaries and is a significant source of contact for service seekers requesting information on essential support services and the primary contact point for responding inquiries from the field. The initiative has helped in strengthening and extension of services provided through the 104 helpline number. It is also helping in facilitation of RMNCAH+N services to the people.

In Police & Safety category sectoral ranking Uttarakhand is placed at the eight position with one impactful project. Andhra Pradesh topped the list with 58 projects that were studied. Sixteen projects from Andhra Pradesh was in the impactful category.

State Disaster Response Force (SDRF), Uttarakhand Police, played very important role in managing Covid-19 pandemic. They have been involved in several activities related to the management of Covid situation. SDRF has played a critical role in contact tracing, isolation and security of doctors, and distribution of food and masks and other humanitarian tasks. SDRF set up Covid Care Centres in the state and also established 15 helpline numbers for migrant movement.

While Uttarakhand has put impressive performance in several sectoral rankings and also made significant gains in the overall state raking in the SKOCH State of Governance Ranking 2020, the performance in District Administration category was not up to the mark. In the District Administration sectoral ranking Uttarakhand slipped one place down to the eight position in 2020 from seventh position in 2019.

District Level Development Authority, Udham Singh Nagar, has implemented a new application called ‘Electronic Authority Services Enabling Application’ or eASE-APP. This enabled the authority deliver the critical services online. Even during Covid pandemic period people were able to get response for their services without a visit to the authority. Despite the restrictions on travel and office opening the work of the authority went on smoothly during the pandemic period.

District Administration Almora has implemented GIS-based approach to rejuvenate Kosi river. Almora district depends largely on river Kosi for its water needs. But the water level of the river has gone down drastically in the recent years. Once perennial river Kosi has now become seasonal. The district administration has taken initiatives to revive the river. Based on a scientific study, recharge zones have been marked and several works have been taken up. More than 74 million litres of water conserving capacity has been created. The initiative taken up in collaboration with the local community has resulted in a significant increase in plantation cover, increase in water holding capacity of forests and barren land and reduction in soil erosion.

Watershed Management Directorate, Bageshwar has launched an initiative to support sustainable farming and livelihood generation through kiwi cultivation and growth center at Shama in Bageshwar district. The initiative has led to improvement in social and economic status of farmers through transfer of technology and generation of income through sustainable livelihood programmes by introducing an innovative project. Uttarakhand Decentralised Watershed Development Project (Gramya-II) is being implemented in 44 Gram Panchayats of Kapkot block in Bageshwar district of Uttarakhand. This is a World Bank assisted project.