The short answer is, yes! Our research has been ongoing at project level outcomes even under Rupani as Chief Minister. And the results thus far are very promising. 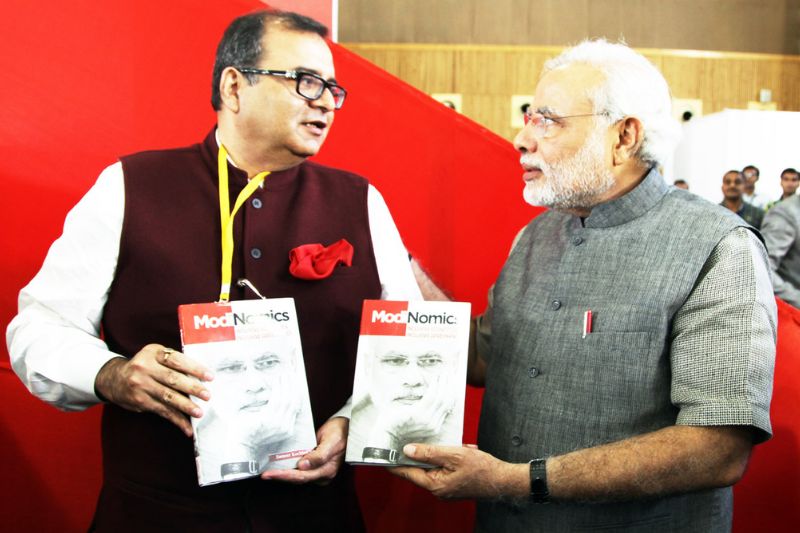 The short answer is, yes! Our research has been ongoing at project level outcomes even under Rupani as Chief Minister. And the results thus far are very promising.

I am now working on an update on Gujarat Model under Rupani that will be released towards the end of this year. The report will deep-dive from Chief Minister dashboard to departmental performance to our primary research on field-level outcomes. Pretty much the same methodology as ModiNomics.

The reason why I was able to write ModiNomics fast was because over a decade of having studied Gujarat, I had 360 degree view of governance right from CM office to departments to grassroots. It was then possible to bring in the perspective of inclusive economics inclusive governance. The book being project level outcomes and evidence based, was welcomed across all political spectrum and till date remains uncontested.

In a conversation with me, Modi elaborated on his governance experience:

Before moving to New Delhi as Prime Minister of India, Modi had laid a strong foundation of governance in Gujarat. It was no surprise that Gujarat topped the SKOCH State of Governance in 2014 and has maintained its position among the top five since then, except 2017.

When Narendra Modi moved to New Delhi in May 2014, Gujarat’s reign went to Anandiben Patel, who had served as revenue minister in Modi’s Gujarat state cabinet. Patel benefitted from the strong foundation laid by Modi. However, innovation and enthusiasm on good governance had started ebbing away. This was reflected in Gujarat’s standing in SKOCH State of Governance.

Vijay Rupani succeeded Anandiben Patel. Rupani took charge as the 16th Chief Minister of Gujarat on 7 August 2016. He led his party’s victory in 2017 Gujarat Legislative Assembly election and subsequently got re-elected as Chief Minister. Rupani has been diligently upholding the “heritage” of Modi. “We will carry on legacy of Shri Narendrabhai Modiji on the four pillars of transparent, progressive, decisive and sensitive administration,” Rupani has put this on his official website. Under Rupani’s leadership Gujarat has made steady progress on State of Governance ranking with introduction of innovative projects across the sectors.

Gujarat made a strong come back under the leadership of Rupani and regained the top spot in SKOCH State of Governance in 2019. Gujarat not only topped the overall ranking in 2019 but also gained numero uno position in seven sectoral rankings – Education, e-Governance, Food & Civil Supplies, Governance (General Administration), Health, Infrastructure and Power & Energy.

Gujarat maintained strong performance in some sectors during 2020 as well but could not match its own standards set in the previous year. As a result, the state slipped to the second position in 2020 SKOCH State of Governance ranking. The sectoral performance was also not upto the mark it had achieved in 2019. Gujarat managed to secure top position in 2020 only in Water category ranking. However, the state secured the second position in three sectoral rankings – District Administration, Police & Safety and Power & Energy.

Economies across the world have been badly hit due to the Covid-19 pandemic. Despite the Covid crisis, Gujarat is estimated to post a positive growth of 0.6% during the fiscal 2020-21, as per the Macroeconomic Framework statement presented as part of the state Budget in March 2021.

Gujarat’s position towards achieving the targets set under Sustainable Development Goals (SDGs) has improved. As per the NITI Aayog’s SDG India Index 2020-21, Gujarat is the best performer in the progress towards SDG 3 that deals with good health and well-being and SDG 9, which is related to industry, innovation and infrastructure.

Gujarat’s impressive performance in health sector is manifested in SKOCH State of Governance study. Gujarat secured the top position in 2019. It has also been reflected in NITI Aayog’s report on performance towards Sustainable Development Goals (SDG). Gujarat has made the best performance among Indian states towards the SDG goal of ‘Good Health and Well-Being’.

Tech-enabled community health system TeCHO+ has played key role in improving the coverage and quality of health services in Gujarat. TeCHO+ is an interactive platform to provide health services to respective beneficiaries at their door steps with two way exchange of data from community to health facility and vice versa. Nearly 5.5 crore citizens have been enrolled through TeCHO+. The system tracks the health services and health status of citizens throughout the state. TeCHO+ is a mobile & web based application, which works as a job-aid for health workers and administrators for improving coverage and quality of health services related to reproductive and child health, non-communicable diseases, communicable diseases as well as mental health. The application provides name-based tracking of eligible persons using mobile phones. It also ensures convergence of ANM, ASHA and Aganwadi workers and linked them with the available health facilities.

Gujarat’s focus on health is also demonstrated from the budgetary allocation to the sector. For 2021-22, Gujarat has allocated 5.7% of its total expenditure on health, which is higher than the average allocation for health by all states in India that stands at 5.5%.

The state government has allocated Rs 11,323 crore for Health and Family Welfare Department for the financial year 2021-22.Gujarat has achieved an excellent Health Index because of these basic facilities created in the health sector.

While Gujarat topped the health sectoral ranking in SKOCH State of Governance during 2019, it has slipped to the 8th position in 2020. Health sector is getting increasingly important due to Covid-19 crisis and there is no place for complacency. The state must make innovative efforts and showcase them to regain the top position in health sector.

“When the economies all over the world were shattered by the pandemic, we did not allow it to impede the major schemes like Narmada project, irrigation projects, drinking water supply projects and construction of new roads-bridges,” Nitinbhai Patel, Gujarat’s Deputy Chief Minister, said while presenting the state budget for 2021-22.

Patel has allocated Rs 1,500 crore for the development of Ahmedabad-Mumbai bullet train project and Rs 11,185 crore has been allocated for different roads and buildings construction. The state government has also allocated Rs 1,478 crore for Ports and Transport department.

Gujarat gained the number one spot in infrastructure sector ranking in SKOCH State of Governance 2019. Gujarat’s Roads and Buildings Department has launched Second Gujarat State Highway Project with the support of the World Bank. The project is estimated to require an investment of nearly Rs 2,000 crore.

Renewed focus need to be given on the sectors like Revenue & Finance, Health, Education, e-Governance, Municipal Governance, Governance (General Administration), Transport and Agriculture. The state needs to keep innovating and showcasing the innovative governance measures in order to maintain its position at the top.