It was 5:15 pm on 28th October 2020 when I told Dr Shashi Panja, “You will see a massive payback in the election results next year for all the good work done by Didi in West Bengal and that I have had the pleasure and opportunity of studying over the years”. Dr Shashi Panja was even then the Cabinet Minister for the Department of Women & Child Development and Social Welfare, Government of West Bengal and the occasion was the Valedictory of 67th SKOCH Summit. 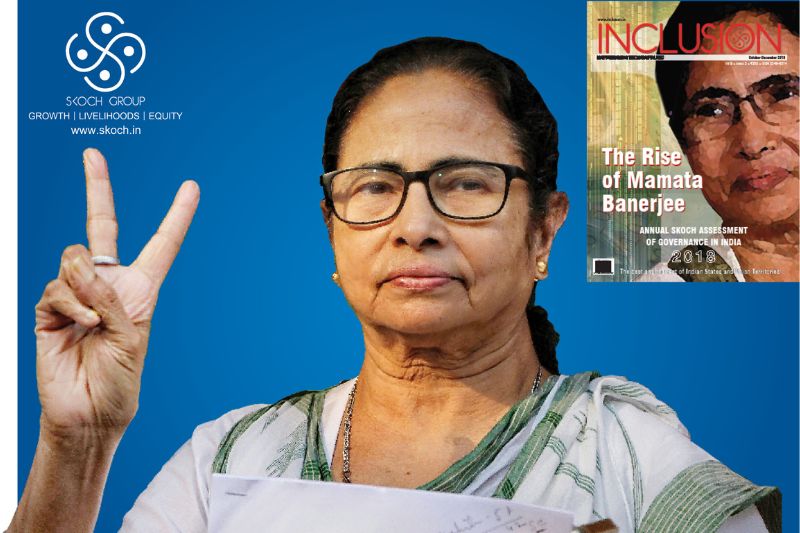 It was 5:15 pm on 28th October 2020 when I told Dr Shashi Panja, “You will see a massive payback in the election results next year for all the good work done by Didi in West Bengal and that I have had the pleasure and opportunity of studying over the years”. Dr Shashi Panja was even then the Cabinet Minister for the Department of Women & Child Development and Social Welfare, Government of West Bengal and the occasion was the Valedictory of 67th SKOCH Summit.

Cut to February 2021, in a candid discussion with a non-BJP Chief Minister, we agreed that Didi will head for a landslide and the desertions from TMC would actually take away whatever anti-incumbency has been there. Both these conversations were prophetic.

Over the years, I have been quite upfront about my admiration for West Bengal Chief Minister Mamata Banerjee. She too has been generous in Tweeting acknowledgements about the SKOCH Awards won by her administration.

West Bengal has long been known as something of an outlier in the Indian political narrative, swimming against the tide. For several years now, the narrative around the state has been that of unrest and uprisings. Trials by the media have focused on the state’s Communist history, labour strikes and a resistance to change, development and above all else, the Centre’s influence.

In all the chaos, it’s been easy to lose sight of one important truth: West Bengal has slowly but surely made great strides in the fields of technology, infrastructure, economy, industry, healthcare and development. The state’s reputation does it a disservice because it has been unable to shake its historic image despite making significant progress in these more traditional governance sectors. The West Bengal that I know and admire is the one that’s bagged the #3 rank overall in our SKOCH State of Governance study two years in a row for 2019 and 2020. In 2018 for the first time, it became the best performing state and Mamata Banerjee became the “Chief Minister of the Year” and made it to the cover of INCLUSION magazine.

I have been following Didi’s trajectory closely for several years and truly believe that her current win is well earned and deserved. The 2020 SKOCH State of Governance rankings alone are impressive enough. West Bengal has ranked #1 in our Ease of Doing Business, Finance & Revenue, Health (Non-COVID), Power & Energy, Transport and Women & Child categories. That’s not all. The state under Didi has also shown tremendous improvements in the sectors of e-Governance, General Administration, Municipal Governance and Police & Safety. In fact, evaluations from 2015 to 2020 show that West Bengal has almost always ranked in the Top-5 across categories, holding its own against heavy-hitters like Gujarat and Andhra Pradesh.

I look at development under Didi in three parts: administration, business and infrastructure. In all fairness, we can only begin to scratch the surface here but I do have to try.

Districts under Didi have evolved to a more nuanced, sensitive form of governance. For instance, in 2015 for Burdwan we studied a project to improve the voter turnout, ease voting experiences and optimise state through a real-time Queue Information System that informed users about the length of queues at their polling stations and encouraged better planning.

Sustainability is a key feature in some of the Municipal Governance projects under her government. For instance, New Town Kolkata Smart City Corporation Limited uses solar energy for garden watering systems in allocated neighbourhoods.

Prior to her leadership and party, West Bengal was economically abysmal, with negligible business and industrial development. Labour strikes and unrest were commonplace. Under the leadership of Mamata Banerjee, the state is viewed as an economic dynamo and is among the faster growing states.

As per the 2020-2021 Budget, the GSDP for the state is estimated at Rs 14,44,174 cr – basis an estimated growth rate of 11.3% over the previous year. PRS India estimates the expense for the year at 3.1% higher than last year – a figure of Rs 2,55,677 cr. The fiscal deficit is estimated to be Rs 31,483 cr (2.18% of GSDP). West Bengal has allocated more funds towards Agriculture and Irrigation, Flood Control, and Welfare of Minorities, SC, ST, and OBCs. True ‘poriborton’ (parivartan/change)! In Dr Amit Mitra, Didi found one of the finest state finance ministers in India and supported him to the hilt.

I’m particularly impressed with the work of the Directorate of Registration & Stamp Revenue. In 2020, it launched the e-Deed and e-Appointment system for e-Nathikaran process of Registration. The push for digital technology across sectors has been a crucial paradigm shift in West Bengal in recent years. Dr Amit Mitra continues to serve as the Finance Minister along with taking charge of Planning and Statistics and Programme Monitoring in May 2021 and is a shining example of Didi’s ability to retain talent.

The West Bengal government has made great strides in the Health sector even before the pandemic. That Didi herself has headed this particular ministry is no coincidence. For 2018, SKOCH studied the Fair Price Diagnostic Center Monitoring system (FPDC) by the Department of Health and Family Welfare. Unique healthcare needs of women are prioritised under her leadership. ‘Waiting Huts for Pregnant Women’ is a project that offers pregnant women in remote rural areas better maternal care facilities under the supervision of doctors.

The Jaago scheme under the Department of Self Help Group & Self Employment is doing incredible work by offering ‘no strings attached funding’ to around 10 lakh SHGs across the states directly benefiting around 1 crore women. The SHGs receive Rs 5,000 through DBT. The primary objective is to increase the participation of women in economic decision-making and social issues.

The MSME & Textiles Dept submitted a project for evaluation in 2015 and we found the ‘myEnterprisewb.in’ portal to be a crucial milestone in improving the ease of doing business in the state. Since 2017, the West Bengal Small Industries Development Corporation Limited is using a digital platform for improved G2C delivery for Online Land Allotment. In 2018, we also awarded Silpasathi–a Single Window Licensing System for all MSME statutory clearances, reducing the process from 45 days to 7. The project is evaluated once again in 2021 for scale and incremental progress.

Another defining feature of West Bengal is the role of women in the decision-making process at every tier. The women-led, women-centric character of the government under Didi is evident in her appointment of Dr Shashi Panja, a doctor-turned-minister, who is combining her professional and personal strengths for the upliftment of women in the state as the Minister for the Department of Women & Child Development and Social Welfare. One of the hallmarks of excellent leadership is the ability to recognise the potential and this is where Didi trumps over other Chief Ministers. In another first, the state drafted a Policy for Empowerment of Women in West Bengal (2013).

The schemes like Kanyashree Prakalpa help young girls from socio-economically disadvantaged families by giving them cash grants so that they are educated and are not married until the legal age of 18. As a result, the female gender ratio in higher education has gone up from 42% in 2010 to 47.3% in 2019.

Equally important is Rupashree Prakalpa, – one-time marriage grant of Rs 25,000 to women from disadvantaged backgrounds. It protects women’s interests and pushes for safe marriages through its legal age to marry criteria.

The department has also done some monumental work in tackling the evil that is human trafficking. The department has set up a dedicated State Task Force, operational guidelines and committees monitoring State Plan of Action for the same.

The West Bengal Transgender Development Board looks at inclusivity, individual dignity and equality as paramount to social justice, economic development and fundamental rights. The state has paved the way to address their socio-economic exclusion.

The Home-based Early Childhood Care & Education (ECCE) and parenting programme has helped 14 lakh parents of 3 to 6-year old children particularly since the pandemic hit educational institutions have shut down.

No other party leader has embraced the cultural ethos of its people like Didi. Bengali culture is world renowned and many, myself included, are in awe of its contribution to art, music, literature, food, crafts and language. Didi’s single greatest asset has been her genuine passion for her people and their culture. And it’s not just gimmickry: inside the political powerhouse beats the heart of an acclaimed poet, lyricist, author and an artist. That she is as adept at writing children’s rhymes as she is at designing a diverse ministerial cabinet speaks volumes about her as a person and a leader.

My Bengali friends and colleagues speak to me of the spirit of culture that influences every aspect of their lives, homes and indeed, political choices. It is something intangible, but undeniable. It doesn’t come into play only on important occasions and elections – it is to be lived, experienced and cherished every day. It matters. And so, it matters to Mamata Banerjee.

We are making long-term social policy investments in infrastructure, services and schemes that increase people’s access to basic services and reduce their vulnerability to economic downturns and social discrimination.

We studied the Lok Prasar Prakalpa project for its efforts to promote the folk art of West Bengal to achieve the twin objectives of improving rural livelihoods and preserving cultural practices. Close to two lakh folk performers use various art forms to highlight social issues like gender equality, literacy and communal harmony. Artists receive retainer, performance fee and monthly pensions. Artists received Rs 210 cr in 2017-18 as part of the government’s push to boost development, livelihoods and cultural identities through the arts.

The Evolution of DIDI

Didi has grown in her role as the state’s daughter and sister, learning from her defeats in the early 2000s as well as her successes in more recent years. She has evolved as a representative and defender of the people. We are entering what I like to think of as the next phase of her leadership persona: the nurturer, the Mother.

I have always maintained that truly successful governance is achieved only through a marriage of strong administrative functions with a genuine passion for the people. Alone, neither is enough in the long run. The problem with identity politics is that the claim is almost always superficial. Tokenism will only take you through one election: you need real substance to win the next. While strong administration might have a touch more persuasion power, ticking tasks off a checklist will eventually run dry if you don’t understand what your people need and want. And this is where Didi shines. She gets it. She really gets it!