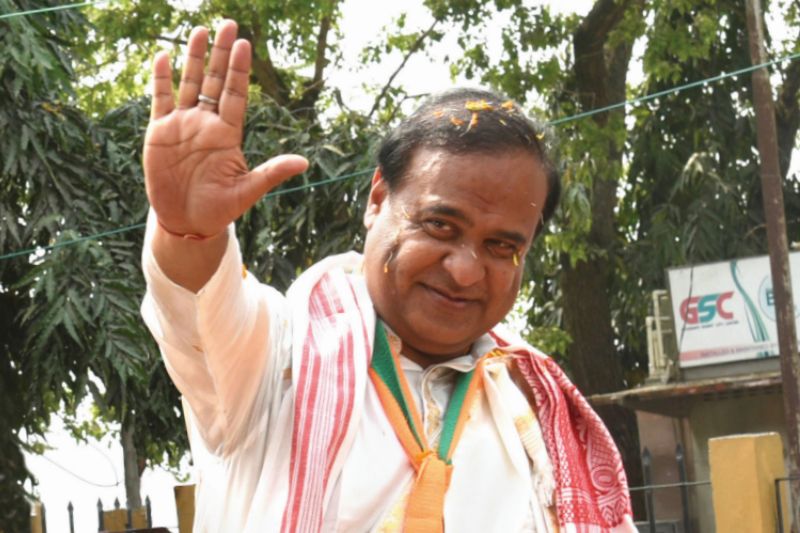 “Our GDP has grown by 6.2% because of massive government expenditure and a boom in the services sector.” He also said, if you have to experience the change, come to Assam. The passion was infectious.

I was publicly rooting for him to be the Chief Minister ever since BJP came to power in Assam. I know what he can do and how well he can deliver.

The same passion and action are visible in the short period that he has been Chief Minister. The most important step of waiving microfinance loans for poor women sets him apart from other Chief Ministers.

I took up his offer in 2004 and landed in Guwahati with a research team, welcomed by the rains and a beaming Himanta Biswa Sarma, who accompanied us personally to his constituency Jalukbari. Without informing the Citizen Information Centres (CIC) that we visited so that there is no window dressing that happens, I observed how speedily the work was being executed. Jamabandi, Birth and Death Certificate and other citizen services were being delivered with an uninterrupted Internet connection. This is where I also met a very competent Samir Sinha, who was then the District Commissioner of Guwahati.

Another very competent officer M K Yadava, who was then heading AMTRON, was accompanying us through the state to show all these interventions.

I was pleasantly surprised. Aamar Seva centers were set up in Guwahati that brought governance to the doorstep of people. At Kamrup, I happened to speak with one Jayanti Boro, who walked in to get her grievance redressed, for which otherwise she had to go to DCs office and spent all day. I could see the glint of empowerment and satisfaction in her eyes.

Even though education was not part of his portfolio, Sarma worked closely with Education Minister then and launched the computer literacy programme for all government schools in Assam. Areas as far as, difficult to reach – Majuli, amid the Brahmaputra, off Jorhat, which I had the opportunity to visit, had running computers in a school with girls learning to speak English using computer-based training CDs (those days) because she wanted to become an air hostess. When I narrated this to Sarma, he said that he is confident that she will one day. Such is his level of confidence in ordinary people of Assam.

The result of this visit was exhaustive documentation and filming of the development work in Assam. My film was called “Emerging Assam.”

I have been leading the ground level assessment and conducting field research for over two decades and all this while, have rarely come across such passion and a soft heart for women empowerment, education, livelihoods, development, healthcare, citizen services and ease of living – qualities that are innate and fit to be the head of state.

It was under his leadership, the state, to ensure transparency in the Budget process, initiated the process of participatory budgeting for facilitating the public scrutiny of expenditure. To make the State budget accessible to all, the Finance Department made Budget 2018-19 completely digital – e-Budget, first by any state in the country.

Assam has been proactive and leading in the implementation of the Ayushman Bharat scheme in the North East. The state had already been running a similar health assurance scheme named after the former Prime Minister Atal Bihari Vajpayee. Both Ayushman Bharat as well Atal Amrit Abhiyan have focused on providing health assurance to the poor and deprived section of the society. SKOCH Team in April 2019 did a ground-level assessment and visited several hospitals in Kamrup (Rural), Baksa, Udalguri, Barpet and Nalbari. Patients with diseases as dreaded as cancer were found to be undergoing treatment under Ayushman Bharat. This was when Sarma was the Health Minister.

The ASHA Payment and Monitoring System (APMS) initiative was implemented under his guidance. This was focused on enhancing the performance of frontline workers thereby improving the primary health care delivery systems. It led to a 4-fold increase in ASHA income by expanding the basket of services – up from Rs 1,188 in 2014-15 to Rs 4,326 in 2016-17 – 100% DBT enabled and timebound.

His approach remains young and aspirational. His swearing-in coincided with the second wave of COVID-19, to which he responded very well. He says, we have managed the crisis differently as suited to the state of Assam and the positivity rate has come down as a result. “We are also discharging our responsibility by keeping a steady supply of oxygen to the entire North Eastern Region and have set up additional plants to increase our capacity,” he had said at the peak of the crisis.

He has been leading from the front and visited several ICUs and COVID hospitals seen wearing a PPE suit in many districts. A daring Sarma has fought the second wave of pandemic better than before. The response to COVID in districts like Guwahati, Bongaigaon, Cachar, Goalpara and Hailakandi has been
an example.

Goalpara is the first district in Assam that has achieved 100% electrification of all households under Pradhan Mantri Sahaj Bijli Har Ghar Yojana – Saubhagya. Bongaigaon has provided entrepreneurial and employment opportunities to the returned workers during COVID including MGNREGA works. Further new projects (development of a park in Mulagaon Gram Panchayat) are under the planning phase to provide gainful employment to returnees.

A gung-ho Chief Minister is now planning to follow the Gujarat Model of Good Governance – I call it ModiNomics.

I look forward to continuing studying Assam and Himanta Biswa Sarma with the confidence that “Emerging Assam” would become “Leading Assam” under his Chief Ministership.

The assessment process for the SKOCH State of Governance 2021 study has commenced.The focus of the study has been reset keeping in view the required priorities of the government. States compete broadly in three areas – money, governance and development. Keeping this in view the focus areas for the year 2021 are:

It’s the first and one of its kind end-to-end Online Revenue Collection and Management System (ORCS) designed and implemented by AMTRON for the Forest and Environment Department, Government of Assam. The system helps in the regulation of the sale of Minor Minerals in the state with facilities to issue, track and monitor electronic Permits and Transport Passes thus enabling the department to minimise the loss of revenue and the time required to execute different construction projects by the government as well as by any private parties.

AMTRON has been contributing towards the best possible ways to use Information Technology in bringing about process re-engineering by streamlining the procedures for bringing about complete transparency in the various revenue linked processes of the Forest department by introducing an Online Revenue Collection and e-Procurement System for the Minor Minerals Concession Areas (MMCA) in Assam.

With better management, tracking and monitoring tools, better communication and security platform, the Forest Department is now able to regulate the sale and purchase of forest produce thereby keep track of all the activities and monitor all aspects on ground through the online Revenue Collection System. Outcomes are as follows: