Two years of ‘Modi Sarkar’ has witnessed profound moments as the story of co-operative federalism unfolded almost every day. Mechanism that determines funds flow to states has undergone a sea change enabling states to enhance their own fiscal space, which was restricted due to discretionary fiscal transfers in the past from the union to states, writes V N Alok 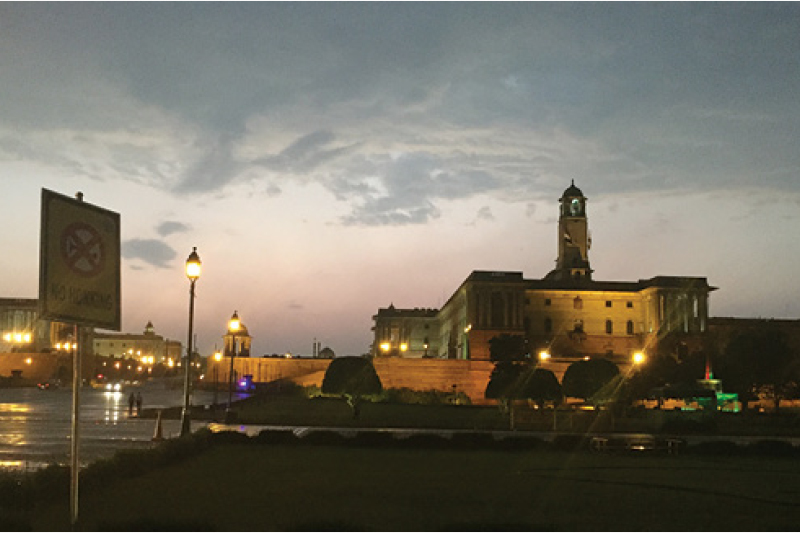 “I believe in co-operative federalism, Centre needs to work with states”, declared Prime Minister Narendra Modi in his first session of Parliament, immediately after the following statement of the President Pranab Mukherjee in his address to the joint sitting of both Houses of Parliament, “The Centre will be an enabler in the rapid progress of states through co-operative federalism. State-specific development models will be developed, taking into account the special needs and unique problems of coastal, hilly and desert areas.”

In his assertion, Modi’s connotation of ‘co-operative federalism’ was somewhat similar to the notion advanced in other federations particularly Germany and the US where the concept was used to make sub-national governments work with the federal government to achieve national goals. Certainly, the processes and circumstances in the formation and operation of these federations are different from that of India. In later stage, Modi explained, “the critical element for co-operative federalism to flourish is that states should commit to the path they choose within the context of the shared national objectives and then deliver on that commitment.”

The transformation is timely as prior to ‘Modi Sarkar’ the Indian Federalism had developed, in the last several decades, enormous unitary tendencies in its functioning. In fiscal matters, the behaviour of Union Government has been indiscriminate in the design of intergovernmental fiscal transfers which created perverse incentives for both Union and states. We can take the example of tax sharing. Until the recommendation of the Tenth Finance Commission (FC) that led to the 80th Amendment to the Constitution in 2000, only the proceeds of personal income tax and union excise duties used to be shared with states. Consequently, the Union government, particularly in the 1970s and 1980s, preferred to rely heavily on corporate income tax and custom duty, which were not to be shared with states. Finally, the Tenth Finance Commission had to recommend the abolishment of article 270 and alteration in article 272 so that the ‘gross proceeds’ of all union taxes could form part of the union divisible pool and a portion of that could be transferred to states. This was twisted in the 80th Amendment Act and only the ‘net revenue’ of all union taxes could become part of the union divisible pool and ‘cess’ and ‘surcharges’ were kept outside the divisible pool. Subsequently, a Union Finance Minister took leverage of the proviso and levied ‘education cess’ across the board.

Notwithstanding, vertical imbalance between Union and states is in-built in Indian Constitution like most other federations in the world. The Union government in India collects about two-third of total revenue and incurs about one third of the total expenditure of the country. This leaves the states to do the reverse. Hence, about 40 per cent of the central revenue had been devolved and transferred to states through the mechanisms of Finance Commission, Planning Commission and Union Ministries.

Moreover, hundreds of vertical schemes, in the past, made Chief Ministers to agitate in the National Development Council. These ‘one size fits all’ schemes eroded fiscal space of states due to the requirement of matching contributions from their end. Many states used to commit matching contributions only to secure central grants. As a result, limited funds were left with them to meet their day to day requirements. Some of these ‘supply driven’ and ‘need blind’ schemes had irked Modi when he was Chief Minister, Gujarat as scheme for electrifications and roads, for example, were of little worth to Gujarat which had achieved near 100 per cent electrification and already built excellent roads.

The story of these reforms in the framework of co-operative and competitive federalism began with the recommendations of the Fourteenth Finance Commission. The Commission was quick enough to read Modi’s mind and deviated from the incremental approaches of their successive predecessors in vertical transfers of resources to states. For the first time, the Finance Commission recommended 10 per cent quantum leap in devolution which meant commencing 2015-16, states were devolved 42 per cent of the union divisible tax pool. Since the Prime Minister and Finance Commission were like minded, the Cabinet accepted this path breaking recommendation.

Consequently, flow of untied funds to states increased at an unprecedented rate from Rs 3.18 lakh crore in 2013-14 to an estimated Rs 5.70 lakh crore for the year 2016-17. But, does this mean that the fiscal space of the Union is reduced? Measures were taken to counter balance the reduced share in the divisible tax pool by: a) augmenting both tax and non-tax revenues; and, b) restructuring of Centrally Sponsored Schemes (CSS). Due to high growth in tax and non-tax receipts, the gross tax to GDP ratio increased and registered at 9.9 per cent in 2014-15 and is estimated to increase further to 10.8 per cent of GDP in 2015-16. In nominal terms, this is a significant increase of 17.2 per cent over 2014-15. Moreover, the non-taxes have become a significant source of revenue. Its earnings can now be compared with the proceeds of three major commodity taxes.

Furthermore, NITI Aayog, which replaced the Planning Commission, decided to constitute a sub-group of Chief Ministers, in its first meeting of the Governing Council held on 8 February 2015, on the rationalisation of CSS. As mentioned earlier, these schemes proliferated over decades and had reduced fiscal space for states by gradually reducing untied block grants under Plan. Approaches of these ‘need blind’ schemes were process-centric which lacked flexibility in their implementation often resulted into diffused outcomes. It will be fair to mention that the previous government, in June 2013, had restructured 142 CSS in response to the demand of Chief Ministers raised in the National Development Council and articulated in the Twelfth Plan. Hence, in the year 2014-15, budgetary provisions were made for 66 CSS which included 17 big called ‘flagship’ schemes which accounted for 86 per cent of the total central assistance and the remaining 49 schemes received low budgetary allocations. But, states felt compelled to implement them only to secure matching assistance.

The sub-group recommended that the CSS should be concentrated on the objects of the National Development Agenda where the union and states work in tandem as Team India in spirit of co-operative federalism. These schemes have been divided into the category of ‘Core’ and ‘Optional’. Core schemes would be compulsory for states to participate. Within the core sectors, emphasis is laid on social protection and social inclusion. Schemes, with this focus, should form the Core of the Core and be the first priority on funds meant for the National Development Agenda. The Core of the Core would include Mahatma Gandhi National Rural Employment Guarantee Scheme (MGNREGS) and schemes for social inclusion, e.g., National Social Assistance Programme, National Programme for Persons with Disabilities, Scheme for Development of Scheduled Caste, Umbrella Scheme for Education of Scheduled Tribe Children.

All non-Core schemes would be optional schemes and the entire amount allocated to them would be transferred to states, and the states would be free to choose which optional schemes they wish to implement. It is recommended that no new scheme should be introduced, without extensive consultations with states, in the sectors identified under National Development Agenda. The existing schemes would be restructured and consolidated into a maximum number of 30 schemes. All of them would ‘Umbrella Schemes’ having large number of components and a uniform funding pattern. The decision to implement components would be left to the states.

The sub-group of Chief Minister submitted the report in October 2015 and was implemented through the union budget 2016-17. As expected, CSS have been consolidated and reduced to 28. These were classified as six Core of the Core schemes, 19 Core schemes and three optional schemes including a new scheme called Shyama Prasad Mukherjee Rurban Mission. Many of the earlier schemes have been restructured into umbrella schemes.

In the first two years, Modi Sarkar has succeeded to alter the traditional funds flow to states to enhance their legislative and fiscal space. So far, measures have been taken to correct ‘vertical fiscal imbalances’. However, issues correcting ‘horizontal imbalances’ will be more contentious for Modi. The fiscal capacities of states continue to vary widely as can be seen from various indices developed time to time. Per capita income of the highest income state is about six times that that of the lowest income State. Devolution of powers to local self-governments as computed in the devolution index also vary considerably. The gulp between the club of rich states and poor in the credit deposit ratio raises questions about the huge flight of capital from lesser developed jurisdictions to relatively developed jurisdictions. Pattern of state income generation also varies considerably. States which rely on agriculture and small manufacturing sector generate lower growth compared to states with big industries and service sector as mainstay. Industrial entrepreneurial memoranda continue to pour into a few select states. As a result, uneven provision of service delivery could be noticed across states. These services include potable drinking water, sanitation, waste management, primary education and health services.

If the present proposal of GST, with or without modifications, is implemented from 1 April 2017 various commodity taxes, like CenVAT, State-VAT, central sales tax (CST) and the like would be rationalised and subsumed. This would entail uniform rates across states to reap the benefit of common market that Union of India offers. Such harmonisation could help trade and industry to grow but this could also create perverse incentives for states to run higher fiscal deficit and would accentuate dependency of states. Though proposed GST will enhance union divisible tax pool and consequent fiscal transfers, further mechanism need to be devised to address horizontal disparities among states.

In the last 25 years, reform agenda has been best guided by leaders with clear political authorities, i.e., Narasimha Rao, Atal Bihari Vajpayee and Narendra Modi. While the earlier two had to deal with coalition partners, Modi has a single party majority in Lok Sabha. The success of co-operative and competitive federalism will lie—how Modi takes his Team India forward to achieve the objectives of National Development Agenda. 2014-15 and 2015-16 were good years for co-operative federalism. 2016-17 looks like, it might be even better.