The Necessity of Financial Inclusion 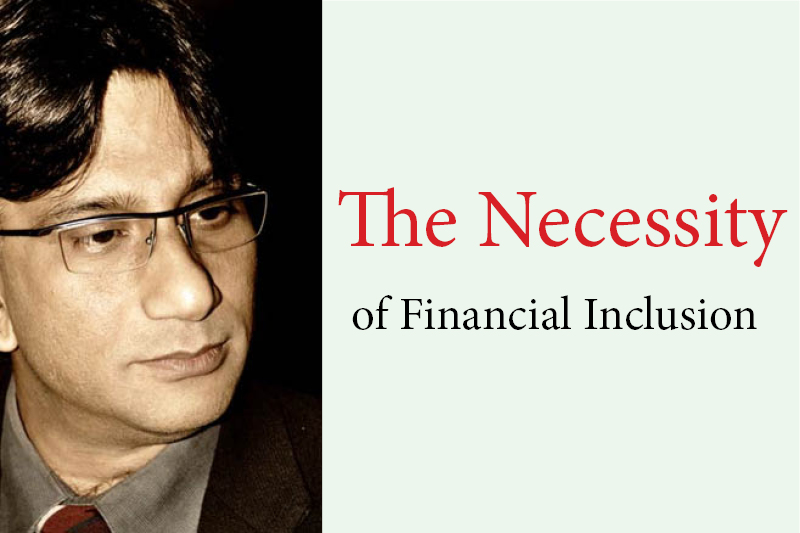 Financial inclusion has today become the rage in policy circles. And this is a good thing because before any real progress can be made one has to first capture the national imagination as it happened with infrastructure investment. There are many noble objectives of financial inclusion, such as equity and fairness, but here let me stress a mundane, but critical, reason for integrating more efficiently the financial resources of the entire population.

India just cannot grow at a sustained high pace without greater inclusion. India’s labour markets are already facing skill shortages in many areas. The poor state of public education, health, transport and sanitation, and the lack of financial sector penetration are increasing the cost of doing business. Unless these supply constraints are eased, bringing in an increasingly larger proportion of the population within the mainstream of economic activity, India will not have the resources to grow at a faster pace. Sustained growth always requires security. The recent challenge from the ultra-left in India’s mineral-rich states is becoming a serious security concern. Much of their grassroots support has been built on the lack of development and service delivery. And it is not unsurprising that these areas are some of the worst in terms of financial sector penetration.

But how does financial inclusion help in the growth process? Very simplistically, growth requires investment and investment requires savings. Most of the savings usually come from domestic sources. Foreign capital is often essential when a country wants to leapfrog its way to higher growth, but it is limited. While foreign capital naturally chases high investment rates, it is ironical that it is often attracted to economies with high domestic savings, i.e., those economies that need it the least. Just look at China and India. The main reason being that high domestic savings assures the foreign investor that the economy’s growth process is sustainable and is not hostage to the whims and fancies of global markets.

Funds were available domestically. Domestic savings had reached 33 per cent of the GDP by 2008 leaving only 3-4 percentage points to be financed from foreign sources. But these funds were too costly. In a global market awash in liquidity, Indian firms sought and found willing foreign investors to provide the funds at a much cheaper rate. So while the financing need was only 3-4 per cent of the GDP, India saw capital inflows of 9 per cent of he GDP. This dependence on foreign inflows made the economy vulnerable to global financial shocks as the events in the aftermath of the October 2008 crisis revealed.

Greater financial depth or inclusion increases the diversity of both the supply of and demand for savings. And this helps to stabilise an economy in the face of external shocks.

India was expected to survive the financial crisis relatively unscathed. And the economy appeared well positioned to do so with limited exposure to exports, relatively tight capital controls, substantial official reserves, an improved policy framework, robust corporate balance sheets and a sound banking sector. Yet, in the aftermath of the collapse of Lehman Brothers in mid- September, liquidity conditions in India tightened surprisingly sharply and risk aversion spiked. And in the following weeks, increasing signs of an economic slowdown emerged: exports and industrial production contracted, car sales plummeted and port and railway freight decelerated. While India managed to extricate itself from the crisis well, it was more to do with unprecedented monetary and fiscal support after the shock hit the economy with full force.

One of the main reasons why India got hit was because domestic firms’ dependence on external funding had increased significantly in recent years, and this combined with the shallow and segmented domestic financial market meant that even a moderate liquidity squeeze would stress credit conditions and require large price adjustments. Since the early-1990s, India’s financial authorities have gradually expanded the range of financial instruments, restricting access to selective classes of investors until the market has developed sufficiently. This gradualist approach, purportedly to ensure orderly market development, has kept the asset classes segmented with limited investor diversity and shallow secondary markets, except perhaps in equities. The limited asset substitutability helped to contain shocks from spreading across markets, albeit at the cost of amplified price volatility within an asset class. But when faced with a large shock-the global liquidity squeeze-this world of asset silos became a key vulnerability.

The intensification of the global financial crisis in September suddenly cut off Indian firms and banks’ access to foreign funding. In reaction they rushed to domestic banks and the equity market for liquidity as their commercial papers and corporate bonds, being illiquid, were too costly for quick fund raising. The resulting spike in demand for bank credit sharply raised interest rates, which were already high because of the monetary tightening undertaken in the recent past to curb inflation. Equity prices-already on a sharp decline as foreign institutional investors had been selling stocks, pressed by their own liquidity difficulties at home-plunged. This shut off the stock market for meaningful fund raising. Meanwhile, commercial paper and corporate bond yields rose further as concerns grew over the ability of firms to survive the liquidity crunch.

As firms converted the funds raised locally into foreign currency to meet their external obligations and imports, the rupee depreciated markedly. To stem the slide, the Reserve Bank of India sold foreign reserves, but this reduced domestic liquidity further, exerting more pressure on interest rates. And soon the real economy was plunged into a severe liquidity crisis.

And this is where increasing financial integration helps. The oft-cited reason is that it expands the sources of financing for formal financial institutions. At the same time, it increases the demand for credit from such institutions. The two together help formal institutions to lower their cost of financial intermediation which helps to finance more growth. It is akin to a positive productivity shock to the economy. Productivity growth does not just come from the use of more efficient technology, but quite significantly from more efficient organisation of economic activity and lower transaction costs. Just as better roads and ports reduce business expenses, so does the lower cost of financial intermediation.

But a second and less discussed reason is that greater financial depth or inclusion increases the diversity of both the supply of and demand for savings. If the types of savers and investors are diverse, they will have diverse liquidity needs and face diverse liquidity shocks. And this helps to stabilise an economy in the face of external shocks.

Of course, for greater inclusion and its benefits to accrue fully to the economy, the financial system needs to be liberalised. In particular, the authorities will need to abandon the current assetclass based regulatory regime, which effectively reduces even the existing diversity in the supply of and demand for funds as we saw in October 2008.