The state of Madhya Pradesh (MP), one of the toppers this year in Smart Governance, is a deserving champion. This is more by virtue of it having disproven the naysayers and of having won against all odds. 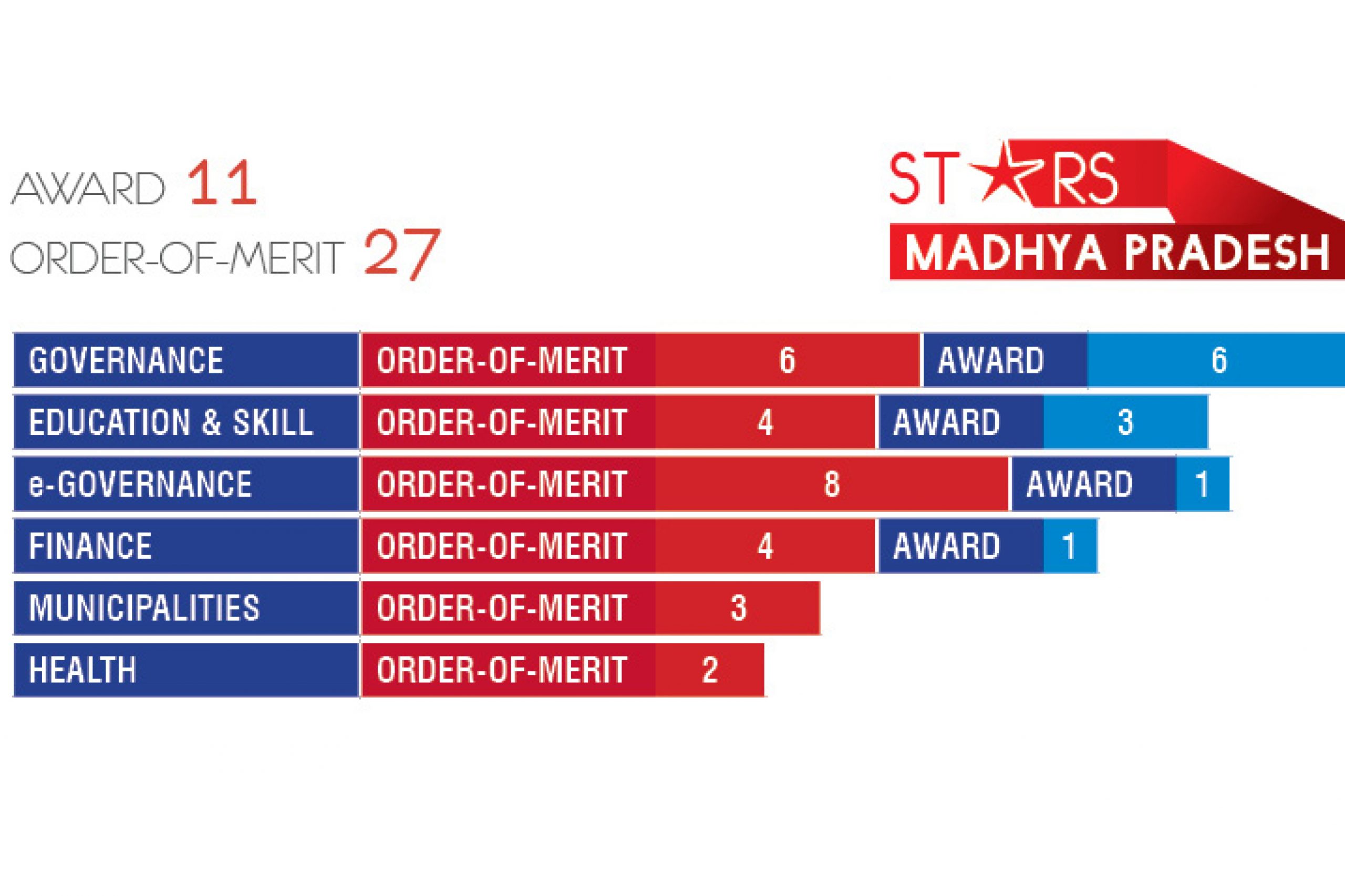 The state of Madhya Pradesh (MP), one of the toppers this year in Smart Governance, is a deserving champion. This is more by virtue of it having disproven the naysayers and of having won against all odds. Under the leadership of Chief Minister Shivraj Singh Chouhan, the state has emerged as a winner by bagging 11 Awards and 27 SKOCH Order-of-Merit. With a decadal growth rate of more than double digit (2001-2011), the state has shown concerted efforts in working its way out of being one of BIMARU states.

Madhya Pradesh today is a model state for inclusive growth. Be it finance, education, agriculture, industries, transport or even medicine and municipalities, MP has policy effects impacting the diverse dimensions of the welfare state. It now enjoys 24-hour power-supply, the industries are already being supplied power without any cut and is now one of the top three states in the country in foodgrains production. Let us see how various projects have helped it to be in the Star category this year.

In the area of finance, MP bagged one Award and received four Order-of-Merit. Computerisation of MP Commercial Tax Department was the clear awardee with 1,63,58,594 transactions till recently resulting in a cost saving of Rs 18,39,50,179. The Centralised State Financial Management System (C-SFMS) has been extremely effective in pushing the smart governance agenda for the state due to outstanding work in treasury management, works department drawal facility (WDDF) and initiating a global budget system.

For Municipalities, the state bagged three Order-of-Merit, all won by the Bhopal Municipal Corporation for its stellar work in water and waste management, safe city initiative and BSUP (Basic Services to Urban Poor) project. Of note is the BSUP, which is underway in 12 localities and under which 11,780 dwelling units have already been completed, which marks almost 98 per cent of the total target. Similarly, as far as the smart governance for skills and education goes, MP bagged four Order-of-Merit and three Smart Governance Awards. Of these, two awards went to MPCVET and one Department of Technical Education and Skill Development, Government of Madhya Pradesh. The district administration of Indore got award for Hamari Ladli and tracker project. Other projects related to the Madhya Pradesh included ITI Online SCVT Semester Examination, Flexi MoU-Skilling through Industry-Institute linkage and Online off Campus Admission System in ITIs.

The state has emerged as a winner by bagging 11 Awards and 27 SKOCH Order-of-Merit citations for its projects. With a decadal growth rate of more than double digit (2001-2011), the state of Madhya Pradesh (MP) has shown concerted efforts in working its way out of being one of the BIMARU states.

The state has also demonstrated good performance and achievements in Health sector and has won two Order-of-Merit for Online Drug Licensing System and Online Registration & Licensing System for Private Healthcare Establishment by the Department of Food & Drug Administration and Department of Public Health & Family Welfare, respectively. Today, on an average, compliance to the prescribed timeline for granting license has been met in 59 per cent of the cases for clinics and nursing establishments. The application for this has been developed absolutely free of cost and runs on a user-pay model.

Agriculture sector has provided major boost to the economic growth. Share of agriculture in the state economy has increased:

Coming to Governance, the state has performed spectacularly with all six projects being awarded. The departments, which bagged these awards are Madhya Pradesh Integrated Social Security Mission, Office of Chief Electoral Officer, Madhya Pradesh District Administration, Balaghat and Directorate of Women Empowerment. Noteworthy projects are the Integrated Social Security Programme Participation of Women in Elections (SPARSH Abhiyaan), Special Project for Assistance, Rehabilitation and Strengthening of the Handicapped, Mukhya Mantri Mahila Sashaktikaran Yojana and Tejaswini Rural women empowerment programme. In fact, as a case in point, the Vatsalya project underway in Balaghat has resulted in a dramatic decrease in the number of children suffering from malnutrition from 1,892 to 1,334 in less than one year (August 2014 to July 2015). The Shashaktikaran programme is aimed at providing care, support and handholding to bring victims of violence, living in isolation due to social stigma, back in mainstream of development process and society and ensure economic development of victims of violence and their self reliance. Job oriented training, complete monitoring till placement has been provided and more than 600 women have already benefited from this initiative.

The state has made tremendous gains and all of these have accrued to its people at large. Housing, agriculture, ease-of-doing business, infrastructure, transport, municipalities and land reforms have made MP a revenue surplus state.

e-Governance is a key focus area for governments all over and MP is no exception. The state won eight Order-of-Merit and one Award. The key winners were Labour Commissioner office, Madhya Pradesh Department of Science and Technology, Department of Food, Civil Supplies and Consumer Protection, Department of Co-operation, MPOnline, Urban Development & Environment Department (UDED). The remarkable project, Automated Building Approval System (ABPAS) by UDED won the coveted Award for successful implementation of online approvals in 14 districts of MP. The end-to-end computerisation of the PDS and the implementation of the National Food Security Act has seen very effective results. 1.25 crore families and 5.5 crore residents have benefited from this till now and there is now a e-Ration card (Patrata Parchi), which is dynamic and changes every month based on the changes in the family. This has resulted in mapping of individual FPS (fair price shops) with beneficiary family and with issue centres enables the stakeholders to reach out to their respective source in the value chain thereby leading to stakeholder empowerment. The MP Online project, aimed at linking citizens with government services, has been one of the trail blazers in India. It has so far generated employment for over 23,000 people. It started with just three departments, it is currently catering to more than 54 departments and hosting 450+ online services of various departments.

While social sector spending has seen an upward trend in recent years, the relatively lower growth of the economy has made it difficult for all sections to benefit from it. Recent spurt in economic growth is encouraging and needs to be sustained. While supply-side capacity development facilitates efficiency and effectiveness in service delivery, reforms enabling demand-driven approaches can foster greater accountability and responsive in public administration.

The MP Online project, aimed at linking citizens with government services, has been one of the trail blazers in India. It has so far generated employment for over 23,000 people and where it started with just three departments, it is currently catering to more than 54 departments and hosting 450+ online services of various departments.

The future promises even more achievements for the state. NICT is setting up 2,158 CSCs in which, NICT has established separate “CSC Project” teams for Indore & Ujjain Division of MP at District Level and Block Level for implementation of the project. The target is to link four lakh households with the Self Help Groups (shgs), provide loans to 3,500 shgs through bank linkages, impart job-oriented training and provide job opportunities to 90,000 rural unemployed. There is also a target to prepare development plans of 14 cities in 2015-16 to achieve the target of planned urban development.

Single service delivery gateway, back-end office automation in collectorates, legacy data digitisation of certificates of different kinds of services etc. will be undertaken under the scheme.

The state has made tremendous gains and all of these have accrued to its people at large. Housing, agriculture, ease-of-doing business, infrastructure, transport, municipalities and land reforms have made MP a revenue surplus state. The fiscal deficit is estimated at 2.99 per cent of GSDP while the revenue surplus estimated at 1 per cent of GSDP for the current year. An aim of smart governance is to realise ‘Make in Madhya Pradesh’ by increasing employment opportunities for youth of the state and by increasing production capacities. Targets set under the Madhya Pradesh Fiscal Responsibility and Budget Management Act, 2005 are expected to be met. A rare feat and an equally commendable one.

Madhya Pradesh outpaced all the major states to top the economic growth charts with a scorching 11 per cent growth in 2013-14 — a year when India recorded its second successive year of sub-5 per cent growth in the GDP. What is noteworthy is that high growth in Madhya Pradesh has happened despite the state’s industrial growth slipping to a new low during the year. Madhya Pradesh is clearly the most consistent performer, having progressively improved its performance with every passing year and managing an average growth of 10.2 per cent during these three years.