We are looking at a future when India will have not only the largest number of working age people but also a very significant proportion of the working age people in the world, and we need to utilise this force to our benefit, says Subir Gokarn 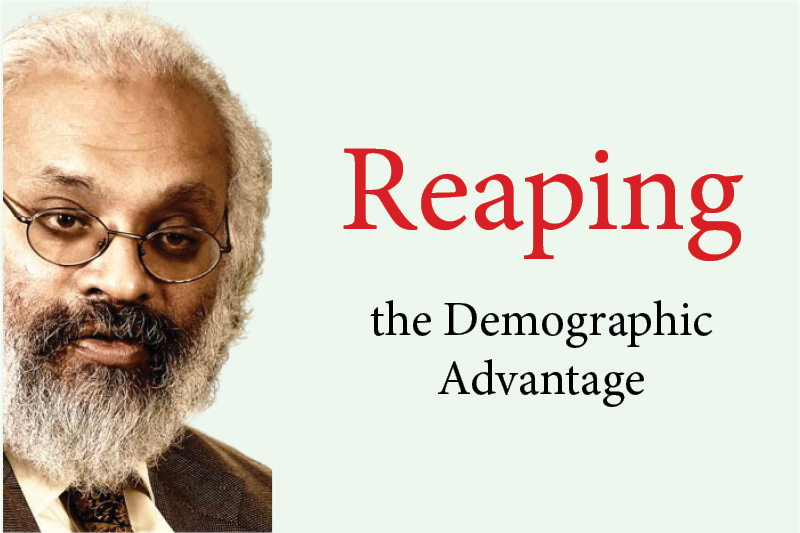 Today in India, demographics is at the core of any challenge that we face in terms of generating employment or delivering public services or education or health or even unique identity numbers. In a sense, while we may complain about inefficiency, inadequacy and the difficulties of creating the right institutional mechanisms to deliver services, the fact is that the numbers in India are of levels not seen anywhere else in the world. This places us in a unique and unprecedented situation as far as the magnitude of the gap, the magnitude of the challenge is concerned and obviously that means that they have to design mechanisms that are almost unique in their ability to operate at the kind of scales that are required.

In fact, it is only in China that we can see numbers that are similar, if not larger, than India’s and it can provide us some inspiration in the way in which they have accomplished transformation of the workforce from agriculture to industry, particularly the manufacturing sector. However, even here, a major difference arises when it comes to age distribution. Today, India is already significantly above China in terms of the numbers of people below the age of 20, i.e., its youth. It is a well known fact that today more than half of our population is below the age of 25 and if we compare this with China, we see that this has very significant implications for population dynamics.

While India currently has in absolute terms less than the number of people that China has in the working age population, which is defined here as the age group between 20 and 60. But by 2030, the positions will change, with India actually increasing or edging ahead of China in terms of absolute numbers. So, we are looking at a not very distant future when India will have not only the largest number of working age people but also a very significant proportion of the working age people in the world because China is ageing quite rapidly but so are many other parts of the world.

To break this up into increments we see that between 2010 and 2020, i.e., over the next 10 years, India will add 120 million people to its working age population and about 43 million to its senior citizen population. China will add only 19 million. Over the following 10 years (2020-2030), India will add 100 million to its working age population while China will actually lose 62 million people of working age population, implying a severe downsizing of its workforce. The will lead to a significant boost in the bargaining power of Chinese workers who will take advantage of the dwindling supply. The implication of this is that the Chinese story of low labour cost, low wage, and high manufacturing growth is not going to sustain in the way that it has over the past 20 years.

But at the same time the Indian situation is actually amenable to sustaining that kind of growth model – low cost, low wage, and strong manufacturing potential. Of course there are many constraints. However, it gives us a roadmap to establishing a robust, sustainable strategy for both high growth and inclusive growth, like China did, creating more employment opportunities for the people in manufacturing and services.

So, the Chinese transition is really an opportunity for us; we have to see this as an opportunity to become what China is now– the factory to the world. India is the only country that will have a similar resource base over the next 20 years and we have to look at that as an opportunity to take on that role. But, of course, this requires the right kinds of policies that facilitate the relocation of the global manufacturing capability from China to India.

But, what is our history regarding job creation. This presents a worrying picture because the growth rate has been moving at a crawl. The percentage of the workforce that was still principally dependent on agriculture was 57 per cent in 2004-05, a very small change from the 60 per cent five years earlier. This is not a very promising rate of transformation and this is completely the opposite of the mirror image of economic activity in the country. While the distribution of economic activity shows that the share of agriculture in GDP is shrinking very rapidly, the percentage of people dependent on agriculture has barely changed. This is putting a severe strain on resources and the situation has to be corrected.

Labour productivity – the ratio of gross value added per worker – in industry in 2004-05 was 4.2 times that in agriculture. Similarly, the ratio of labour productivity in services vis-à-vis agriculture was 5.5. In other words, one worker in the industry and services produced about five times as much GDP as an individual worker in agriculture. This is really the opportunity for growth because if one is moving people from a low productivity sector to a high productivity sector, one is going to get more GDP per worker, which is going to contribute to growth, as also create larger earning opportunities, which contributes to inclusion.

Historically, this has been the basis of rapid and inclusive growth in every country that has preceded India down the growth path. One does not have to confine oneself to China, one can consider the South East Asian nations, Korea, Taiwan, or Japan, or even the United States. In the past, the transformation from poverty to middle income, from an essentially poor, agrarian workforce to a prosperous affluent middle class industry and services workforce, has been accompanied by a significant increase in the share of manufacturing to GDP and the linkage is quite obvious because productivity per worker has historically been significantly higher in manufacturing than it has been in agriculture. So, it is a very simple message that apart from economic growth and promoting inclusion, we have to accelerate this transition of the workforce from agriculture to manufacturing and services.