The Integrated Basin Development & Livelihood Promotion Programme (IBDLPP) is a first of its kind programme being launched by the State of Meghalaya to achieve the integration of public programmes and service delivery within the sustainability framework, so that the value maximisation can place with the existing natural and financial resources. 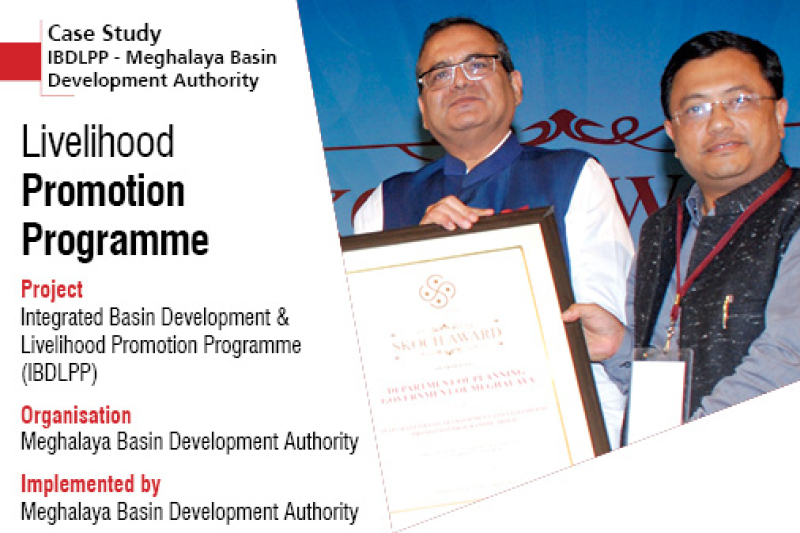 The Integrated Basin Development & Livelihood Promotion Programme (IBDLPP) is a first of its kind programme being launched by the State of Meghalaya to achieve the integration of public programmes and service delivery within the sustainability framework, so that the value maximisation can place with the existing natural and financial resources. The outcomes of better governance and better management of natural resources help the State become progressive and enlightened in its functioning.

People would build their own capacities to make rational and more environmentally responsible choices. The net effect of this programme would be difficult to quantity at this stage, especially because it has both the tangible and the intangible components but both are highly valuable and sustaining. And, quite understandably the programme will evolve more in due course of time, as the experiences will enrich it further. This project works on positive pitch, with well-thought out strategies
and executions.

The resources and investments required for effective implementation of the programme were mobilised under schemes of State Government, Central Government, International Organisations, Multilateral Institutions and through community contribution. A lot of efforts were made for encouraging pooling in of investments and funding of viability gaps in common and joint liability projects. Hence, the resource and investment management was a challenging task.

The EFCs were set up at the block level in order to have grassroots level interface with citizens to provide the required intellectual and academic rigour/depth to the different components/interventions of the programme.

Following knowledge institutions came into existence during the project’s implementation:

These institutions’ primary role is to create actionable knowledge in partnering with other regional, national and international institutions, academia and other stakeholders that can be used by the implementing agencies of the programme.

Meghalaya’s flagship ‘Basin Programme’ is a pioneering model to break the strait jacketed one-size-fits-all approach of government schemes, which provides partial fixes for the betterment of lives, selecting a few ‘beneficiaries’ leaving a larger number of people disappointed. This programme mobilised over $100 million of Externally Aided Projects to scale up its various missions.

Till date, over 1.2 lakh partners have visited Enterprise Facilitation Centres (EFCs) while almost 50,000 have interacted through structured dialogues. Among them over 40,000 partners are now moving on to various livelihoods and new enterprises. 7,118 fishery ponds have come up during last three years as against the total 3,162 ponds created in the state since independence. The irrigation coverage has doubled up from 34,060 hectares in the year 2010-2011 to 68,086 hectares in the year 2013-2014.