The Aadhaar journey, which began a year and a half ago, has the potential to transform governance in India. In order to effectively leverage the potential of Aadhaar one needs to understand the drivers for the project. There are two primary objectives of Aadhaar

b) To eliminate the duplicates and ghost records which exist in the list of beneficiaries such as public distribution system (PDS) and other welfare/ subsidy schemes of the government.

The challenge of establishing identity is a significant for many in India. Often women and children do not necessarily have documents which establishes their independent identity, this becomes especially difficult for the poor and marginalised and more so for migrant workers, homeless, tribal and nomadic populations. This is what keeps them from accessing social welfare schemes designed for their benefit, from accessing banking and financial institutions thereby restricting their participation in the overall economic growth of the country.

To understand how access, inclusion and identity are linked one needs to only look at the issue of financial inclusion. Financial inclusion gives the poor the resources to migrate for better jobs, invest in entrepreneurship, and insure themselves against bad times and economic shocks. Without this, they often find themselves trapped in their circumstances.

The Aadhaar project has made remarkable progress in a short period of time. As against the announcement made by the Finance Minister in Parliament that the first set of numbers will be delivered after 18 months of start, the first Aadhaar numbers were delivered in just about 14 months. Currently, there are 100,000 Aadhaar numbers being issued per day, over the next few months this is expected to go up to 1 million a day.

a) Financial Inclusion with bank accounts:

Banking penetration in India remains poor thereby leaving a large section of the poor (urban and rural) excluded from accessing financial services. On 16th December 2010 the Ministry of Finance recognised that the Aadhaar letter could be accepted as a valid letter for opening small accounts, subsequently on 27th January 2011 the Reserve Bank of India issued a notification to this effect. These decisions give impetus to the plans of the UIDAI to enable financial inclusion. Essentially, when a resident enrols for their Aadhaar number, they are asked if they would like to open a bank account, the UIDAI is partnering with banks to ensure that every person who is given Aadhaar number also gets a bank account.

b) Delivery of cash at the door step:

The poor in India pay a poverty premium. This reality is evidenced by the difficulties faced by MGNREGS workers who end up spending money, sometimes up to Rs 125 a day in order to draw wages of Rs 525 under the MGNREGS programme. This is because the banks are not located close to where they live. Ironically middle class and rich India get access to cash anytime they want through the ATM network in the country. Aadhaar can make this convenience possible for the poor as well. The mobile network in India is at the 800 million mark and is growing by 20 million a month, Soon there will be universal coverage of mobile phones. A business correspondent model of banks to enable delivery of financial services at the village level is taking shape. This coupled with Aadhaar authentication will enable delivery of financial services to the poor at their door step. With a mobile phone, a bank account and the Aadhaar number, you have a completely scalable infrastructure at the village level to deliver services. MGNREGS wages, scholarships, pensions, etc can be delivered to right beneficiaries directly.

One of the objectives of the Aadhaar project is to eliminate the duplicates and ghosts in current beneficiaries database. This objective is achieved by de- duplication at time of issuing the Aadhaar number. However, there are several other ways that Aadhaar can be used to make the delivery of public services more efficient.

For instance, the public distribution system delivers ration, kerosene, and other commodities at a subsidised price to every poor person. Under the existing system, it gets channelised through the Food Corporation of India, State Food Corporation (SFC) down to the fair price shop level. In this entire chain, it is hard to ascertain whether it is reaching the actual beneficiary and that there is no leakage in this entire chain. With the authentication infrastructure it is possible to have a completely accountable and transparent system of delivery.

Similarly, the Aadhaar infrastructure can be used for better delivery of health services, education services including monitoring a child performance in the school system to address the issue of drops outs. Aadhaar can be leveraged to get an accurate estimate of children who should be targeted under the different schemes. In sum, the entire service delivery system can be cleaned up and made more effective. These are only some of the possibilities for the public sector. 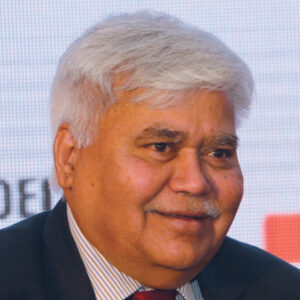 Dr R S Sharma was appointed Chairman, Telecom Regulatory Authority of India (TRAI), on 10 of August2015. Prior to joining TRAI he was Secretary to the Government of India in the Department of Electronicsand Information Technology. He has also worked as ChiefSecretary to the State Government ofJharkhand (India). His other assignments include Director General & Mission Director of the UniqueIdentification Authority of India (UIDAI) where he was responsible for the overall implementation of theproject to provide Unique Identification (christened as “Äadhaar”) for all residents.