Two important elements are inter-related and actually throw some light on financial deepening both as an opportunity and as a challenge for us in India. For it to be an opportunity, we need to view Financial Inclusion not merely as a service to the unbanked, but as a platform for catalysing development and inclusive growth. Therefore, financial inclusion is not to be thought of merely as an efficient method of extending no-frill financial services to a whole crosssection of people who, today, have no access to such services, but actually as a platform for inclusive growth. The challenge will be to re-position the initiative very differently and far more holistically as a service delivery platform

It will also bring into the discussion, the need for inducting stakeholders, who invest in the mandate of Financial Inclusion in their role of creating infrastructure as an independent, discrete activity and as a common denominator for services relating to financial inclusion, deepening, and a range of other services as required. Infrastructure here would mean all those intermediate blocks that enable the whole scheme to hang together and work seamlessly in an integrated fashion, leading to a reduction in transaction costs and improvements in efficiency and productivity, and, thereby, facilitating inclusion. This infrastructure aspect of financial inclusion is often confused with technology provision and banking services provision, but is clearly neither of these. It is my thesis that it is the lack of such differentiation in the market that has retarded the pace of financial deepening and inclusion in the country.

More specifically, on this infrastructure platform, banks would be capable of efficiently providing services at minimal transaction costs, governments would be able to electronically transfer benefits with minimal transmission losses, Business to Community, Community to Community, Business to Business transactions would be rendered far more efficient, and perhaps most importantly, a network of Banking Correspondents (BCs), and community stakeholders would more directly benefit from efforts at Financial Inclusion. It is in this sense that infrastructure emerges as a key element of the strategy that can help promote financial inclusion in a sustainable manner over the next 3-5 years.

Viewed from the perspective of infrastructure, initiatives to drive Financial Inclusion can potentially bring in a whole host of new players, who have previously not been engaged precisely because they see infrastructure as the only aspect in which they are invested.

The infrastructure sector is an interesting play. Over the last 20 years, as a country, we have witnessed a dramatic spurt in growth. Thus, while in 1991 a US$ 5 million project size was considered large, by 1997, the definition of a large project was around US$ 100 million and over. Today, we are looking at project sizes of over $3 billion, where recovery of investments is predicated on the levy of user fees. It is a very interesting play for another reason. There is widespread agreement that the PPP initiatives in infrastructure creation have resulted in an improvement in the efficiency and quality of service. In addition, they are required to demonstrably establish in a transparent fashion. So, be it roads, telecom, power or, even water, we are seeing the benefits of private sector participation, motivated by profits, and providing high quality services so as to recover investments through the levy of user fee.

Over the last 20 years, private sector capacity to take on the developmental agenda has significantly increased. A number of private sector institutions are only too aware of the responsibilities that they need to discharge in this regard if they are to sustain this momentum. Therefore, it is in this context, that a more strategic design and implementation of the Financial Inclusion initiative can bring in a whole host of new players.

There is a second dimension to infrastructure, which also presents an interesting opportunity. Most infrastructure players have very longterm perspectives. A design profile of an infrastructure player will typically be 50 years. In IL&FS, for example, projects have been designed with a 100-year perspective. In contrast, Banks and technology players have much shorterterm perspective. Therefore, when projects are designed from an infrastructure point of view, there would be a natural tendency to design the project as a platform. In such a design, the infrastructure service provider would typically be the most motivated to catalyze and encourage a variety of players to invest, sustain, and grow the value of services recognizing that the ISP will require to sustain operations for the long run.

That, of course, raises the issue of risks involved in such plays. One of the consequences of moving up the scale of projects is that when you are looking at financing recourse on projects of more than $1 billion, you have dramatically increased the quality of risks that you have to deal with. Domestic balance sheets, whether they are of the banks or the private sector, are limited precisely because of the absence of a secondary market in debt. As a result, there is simply no instrument by which a promoter is able to foreclose on the risk of an exposure by getting out of a project after having invested in it. Therefore, one of the critical requirements today, if we want to dramatically expand the available pool of resources for infrastructure, is to introduce and manage the growth of a secondary market in debt. It is not difficult.

PPP arrangements are unique in that they explicitly establish contractually a singularity of purpose across all stakeholders of the initiative that drives the agenda of infrastructure creation and its use thereafter. The adoption of PPP arrangements across a number of other sectors stands testimony to this. It demonstrably provides the most efficient and transparent value for money to users who benefit from the asset that is created.

There is, however, a linked matter, which we need to understand. In sector after sector, the banking system is already touching its prudential limits of investment on a sector norm basis. So, whether it is roads or power, banks are finding it difficult to bring in the kind of resources that are required. In the urban sector alone, for example, it is now estimated that we need fresh investments of close to about $1.5 trillion to be invested over the next few years. That kind of investment quantum will simply not be available on banking balance sheets unless we create mechanisms through which we can do this.

It is in that context that IL&FS in the mid-90s introduced the concept of takeout financing for one particular project. More recently, IFCL has introduced take-out financing as a method of improving and deepening the financial markets. What take-out financing does is, it essentially gives an opportunity to the investor to invest in a long-term bond but makes provision for him to exit in a much shorter duration if desired. So, it would typically be a 15-year bond that one can sell back to IFCL at the end of the fifth year at an agreed rate. Takeout financing does two things: it gives me, as an investor, an exit and secondly, it provides me with the ability to benchmark the yield on this, based on the risks that I perceive in IFCL’s balance sheet and its capacity to take me out in the fifth year, both of which are hugely useful in infrastructure projects. There are many different variations of this, and therefore takeout financing as a conceptual framework for deepening a market is absolutely a step in the right direction. It is an intermediate step that needs to be built up even as we create a secondary market in debt as it emerges.

When you move forward and you start talking about very large investments in sector after sector, takeout financing instruments pose a second dimension of risks which one has to deal with. Both risks are to do with the fact that as one begins to invest larger amounts of money in a system, there is invariably greater and greater distancing between the investor and user of the investment, and there is a real risk of moral hazard creeping in, which, arguably, is one of the big reasons for the upheaval in the global financial order in recent years. That risk is a real risk in this country.

The capacity of government to act as a counter party for very large project sizes is questionable. The capacity of the banking system to withstand shocks at such large quantums of investment in case of down cycles is also questionable. The capacity of the private sector to stay the course against these kinds of shocks at these very large investment values is also questionable and therefore, systemically, we need a solution which gives the kind of strength that is required to allow this country to make those investments. The call for investments is only growing. There is no question that we need to grow at 9.5 per cent and that is the target being set for all of us. But the instruments and the systemic capacity and the resilience that we need to put in place to support that level of investment are critically required. 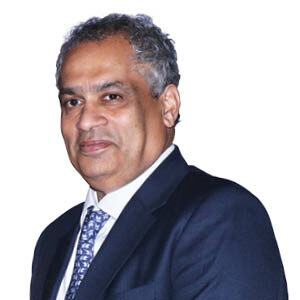 For close to 28 years, Hari Sankaran, former vice chairman and managing director of IL&FS, was busy charting the course of the infrastructure financier alongwith its former Chairman Ravi Parthasarathy.