The decade starting 2010 is going to be a particularly important one because it is our performance in this decade that will determine whether we are ready to reap our demographic dividend, realise our growth potential and build a more inclusive society. It is also a decade where the growth trajectory is going to be dictated by information technology. IT, it is increasingly becoming clear, is going to determine whether we are actually able to realise the country’s growth potential. This is much more clearly visible today than it was 10 years ago.

The seeds of the Indian IT evolution were sown in mid-1985 and they remained below the surface for most of the next 10 years. It was only around 1995 that the real potential of what India could do in IT and what this sector could do for the Indian economy became clearly visible, with the next 10 years seeing a phenomenal growth. The period between 1995 and 2005 saw the Indian people becoming aware of IT not only in terms of employment or GDP growth, but more importantly, the role it could play in transforming the governmentcitizen, business-citizen and citizen-citizen relationships. The boom in the mobile sector has been one of the most visible indicators of the role of IT. But, it is the potential of what IT can actually do within the country that has become much more visible and much more pervasively understood among both decision-makers and the citizens. While earlier people felt that to reap the benefit of IT, one had to be well-educated, financially well-off, be a city dweller, and English-speaking, today it is increasingly clear that it is IT that can be the great leveler between the rich and the poor; between the city resident and the farmer in the village; between the slumdweller and the high-rise apartment owner.

Today, necessary functions of the government, like taxation or social benefit programmes, are beginning to see a transformation. With the increased use of information technology, such functions are becoming more transparent, accessible and actually reachable to all sections of society. These transformations may have been a bit slow in coming, but nonetheless there is a fairly relentless and accelerative forward movement. Earlier e-governance efforts were primarily based on computerising age-old processes, with the result that no major benefits were visible. Simply digitising the existing government processes merely adds an additional layer of expense, complexity, delay and confusion. Now, however, governmental processes are being re-designed keeping the citizen at the centre, providing for the empowerment of citizens, businesses, producers and consumers.

Today, it is the potential of what IT can actually do within the country that has become much more visible and much more pervasively understood among both decision-makers and the citizens.

More importantly, technology is playing a major role in areas like healthcare and education sectors which are high on any government’s agenda. In fact, it is adoption and growth in these developmental sectors that will actually determine how well we reap the demographic dividend. It is not only about educating this generation, but it is about giving them quality education. The government has done a great deal in terms of meeting the challenge quantitatively, but gaps remain when it comes to the qualitative aspects. And, it is increasingly becoming clear there is no way that such gaps can be bridged without heavy reliance on technology.

Concerns over whether the digital divide will deepen the existing divisions and gaps that exist in society only partially, highlight the role technology can play in bridging them. In fact, the digital divide that exists today is merely a reflection of the divides which actually exist in society. It is becoming increasingly clear that greater use of technology in sectors like health and education will help bridge the opportunity gap that exists between the haves and the have-nots. The fact that the government, the private sector and the social sector are embracing technology to a much larger extent is going to play a very major role in the transformation that we are talking about.

Today, there is a clear and much more pervasive understanding of the role of IT. More importantly, India has a very vibrant IT sector, which has enormous depth. Also, as a result of the turmoil in the global markets last year, IT players have started looking seriously at the domestic market, for which they have the necessary skills and understanding of the domains and context. Another advantage is that we are late starters in e-governance and as a result we not have much legacy in terms of back-end as well as non-standard applications. This puts us in a very good position to take maximal advantage from the learnings coming from implementation in our own country as well as from the experiences and failures of other countries.

This increased government focus on IT is being done with the aim of increasing efficiency, reducing the cost of administration, increasing convenience and increasing access, among others. As a result of the multiplicity of objectives, there is often a debate about what is the primary objective of such IT spending. Under the National E-Governance Plan, amongst all these multiple objectives, all of which are relevant, primacy has been giving to the provision of services to citizens and businesses. So, the first and most critical outcome in public IT spending is that services should get created and these services should cover a variety of areas, both the regulatory and developmental, including income tax, excise, land records, etc., on the regulatory side and services like education, health, employment and training on the developmental side.

The provision of services includes two major segments, one of which is a service delivery platform that covers the length and breadth of the country. This is a critical part of public IT spending and is being executed through the common services centres (CSCs) at the front end, 100,000 of which are being set up in the first phase. By the year 2012, it is proposed to set up such CSCs in all the 240,000 panchayats in the country. While there have been initial hiccups, the rollout of the digital service delivery infrastructure is well underway. The government has also taken several initiatives to accelerate these activities. For example, the Capacity Building scheme provides an institutional framework for state-level strategic decision-making. Under it, states are required to build capacity in terms of human resources for conceptualisation, development and management of e-Governance projects. Implementation will not fall under the scope of this scheme. e-Governance needs people with interdisciplinary knowledge, the ability to understand technology and the domain. We need HR that understand technology and can apply it to help solve critical issues.”

While earlier e-governance efforts were primarily based on computerising age-old processes, now, however, governmental processes are being redesigned keeping the citizen at the centre and providing for their enablement.

But it is second segment that is the services that will be available through the CSCs that is a cause for concern. There is still a huge amount of ground to be covered in actually making services available. The general observation is that while successes are there and they are isolated, they are not been replicated quickly enough. What one state does successfully does not travel to another state quickly enough; what one department does in a state does not move to other departments quickly enough. It is, therefore, critical to develop and enforce standards uniformly over all states and central ministries and functions, spanning from voting, taxes, certificates, financial products, lawenforcement and welfare for individuals, properties of land, institutions, businesses, etc. These standards should not be hardware-centric and vendor dependent but should enable easy participation.

Another area of concern is that the key people involved in IT initiatives are often shifted to other positions while projects are midstream. This affects the whole chain bringing the system back to its starting point.

So how does one optimise cost and speed taking into account all these factors? This leads to the question whether we can have and facilitate some sort of sharing of key resources with the private sector participation so that speed of roll out of these services becomes faster? It is in this context that new technological approaches like software as a service (SAAS) or cloud computing assume importance. The aim here is not to adopt a technology simply because it is there, but only if it helps speed up the rollout of more services, which is the key priority of government IT spend today.

The success or failure of egovernance initiatives in the country can be assessed by two measures: just the percentage of government services that have been e-enabled and the percentage of people who have access to these services. Collectively these measures will also determine the progress that has been made in areas like literacy, education, health and financial and social inclusion. 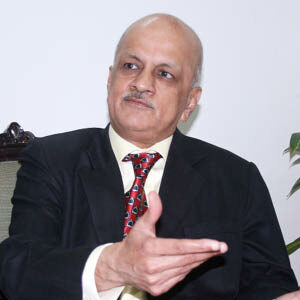 R Chandrashekhar is Secretary, Department of Telecommunications, Ministry of Communications & IT

Leapfrog into Nextgen of Governance

Microsoft Goes for the Clouds