Once a darling among small savers, Kisan Vikas Patra is back on the investment basket. But the government should have given it the same tax treatment as that enjoyed by PPF or EPF under Section 80C of Income Tax Act, to give the small investors especially those in the hinterland to grow their hard-earned wealth and also use it as a collateral to access funds in times of distress. INCLUSION takes a closer look. 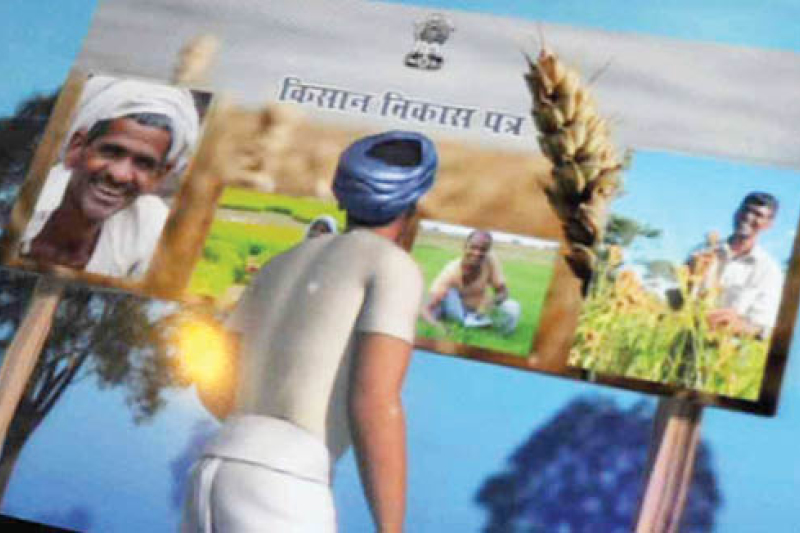 The relaunch of Kisan Vikas Patra (KVP) should not be looked as a mere addition of an investment option and a conscious bid to lift the savings rate of the country, but as a decisive pro-poor policy of the Modi government. Once a darling among small savers soon after its launch in 1988 when money could be doubled in 5 years and six months, KVP was closed in 2011 following the recommendations of a committee headed by former Reserve Bank of India Deputy Governor Shyamala Gopinath. Interest rate on other instruments were linked to government securities. Small savings collections plunged since then and ponzi schemes spawned across the country to take its place.

If one traces the history of small savings, one thing becomes evidently clear—the poor have been not just marginalised in terms of income opportunities but also in terms of investment options. Administered interest rates especially on small savings have been blamed for keeping bank deposit rates and hence lending rates high. They were also classified as one of the avenues of black money generation. This alarming situation resulted in some well-orchestrated “harsh” reforms by the government on the guidance of Reserve Bank of India in the past five years—some small savings instruments including KVP were discontinued, the existing schemes were aligned with the yields of low-return government bonds and, know-your-customer (KYC) norms have become mandatory.

Assuming even a Rs 50,000 annual investement by a poor household that can’t meet the KYC norms, the annual interest income will be just Rs 4,350 annually. Is it a good enough pension even for a poor household?

The resultant impact of the reforms have been quite detrimental as there has been a sharp fall in the sale of small savings schemes and flourishing of fraudulent ponzi scheme. India’s household financial savings fell from 12 per cent of GDP in 2009-10 to 7.1 per cent in 2012-13, which is primarily responsible for bringing down the overall savings rate from 33.7 per cent to 30 per cent during the same period. With savings falling, investment rate also took a hit as also the overall economic growth.

What’s ironic, the main objective of restricting small savings did not serve the main purpose—banks’ lending rates have not come down even though they have reduced deposit rates and ensured a handsome net interest margin. And, black money generation continues through shoddy real estate deals and other avenues, which were prevalent earlier and continues unabated even today.

So, all the allegations against KVP and other small savings schemes were just a clever ploy to augur the banking business and dampening India Posts’ schemes even if it came at a cost of depriving the poor households of some good investment option. In this context, one cannot but appreciate the Modi government’s move to bring back KVP.

While the government reportedly aims to mop up a whopping `350 billion from KVP to supplement its bloated market borrowing to bridge the fiscal deficit, retail investors have reasons to rejoice from the new small savings instrument that promises to double their money in 100 months (8 years 4 months) offering 8.7 per cent return in a new bearer instrument.

What the government ought to have done was to provide KVP the same tax treatment as provident fund and insurance contributions get, to give the small investors especially those in the hinterland to grow their hard-earned wealth and earn a decent pension income, and most important, use it as a collateral to access funds in times of distress. All of the interest income from KVP is taxable in contrast to PPF or EPF or National Savings Certificate (NSC), which are fully exempt at all stages.

Financial products today are more attuned to suit the rich and workers in the organised sector. Under Section 80C of the Income Tax Act, the salaried class gets a whole lot of choice for investment and at attractive rates. A person is exempt from income tax for their contribution of up to
`1,50,000 per annum in life insurance policies, Public Provident Fund (PPF), Employees Provident Fund (EPF), Equity-linked Savings Scheme (ELSS), pension plan, principal prepaid on mortgages and bank fixed deposits of minimum 5-year tenure.

For the economically weaker section, post office small savings schemes are the main source for savings. But there has always been an appetite for high-return investment options—the mushrooming of ponzi schemes is a glaring evidence to it. In a country where almost 80 per cent of the population do not have a social security cover of any form, instruments like KVP could have offered a tangible solution for post-retirement income. However, absence of tax breaks makes it unattractive for the unorganised sector workers when compared to PPF and EPF available for organised sector workers.

While there is no upper limit for investing in KVPs, the KYC rules—a copy of the PAN is necessary if the investment is above Rs 50,000—may come in the way of accumulating wealth by poor households.

Considering the fact that Aadhaar now covers 60 per cent of the population, KYC should not be a problem in many parts. But there could be still millions of poor households who neither have Aadhaar or a PAN or any other form of identity. These households would have to confine themselves within the Rs 50,000 limit in savings in KVP.

Assuming even a Rs 50,000 annual investment by a poor household that can’t meet the KYC norms, the annual interest income will be just Rs 4,350 annually. Is it a good enough pension even for a poor household?

What’s ironic, the main objective of restricting small savings did not serve the main purpose—banks’ lending rates have not come down even though they have reduced deposit rates and ensured a handsome net interest margin. And, black money generation continues through shoddy real estate deals and other avenues, which were prevalent earlier and continues unabated even today.

The way banks have reinvented deposit and loan products in the past two decades, there is hardly anything that is not available for the urban rich. In contrast, there is a dearth of loan products for the poor. Except for a handful of post office schemes and savings bank account, there is no product that fetches a good return.

While banks will be mandated to sell KVPs, there is no clarity if banks can treat KVPs as a collateral or not.

If the government intends to tap the idle cash in rural areas and shore up savings, some of features in KVP needs to be tweaked.