Different departments and institutions of the government owe huge amounts of money to companies, vendors and contractors. In order to revive the investment cycle it is very important that such payments are cleared immediately.

Arvind Virmani, Chairman of EGROW Foundation and former Chief Economic Adviser, Government of India said the government has started the process of clearing the dues, but they are done in a piecemeal manner.

“We should take this opportunity to completely clear payments. There is always a carry over. This has been going on for 50-years. This is an opportunity when we say let’s make it zero,” said Virmani, senior economist who also worked with the International Monetary Fund as India’s representative.

The government recently directed all Maharatna and Navratna Central Public Sector Undertakings (CPSUs) to clear all the dues of vendors and contractors. Virmani said all such payments should be cleared at one go.

He said the government should take fiscal route to raise money for clearing the dues. This would put substantial amount of money in the hands of the private firms, vendors and contractors and would help revive the investment cycle. Investment plays a critical role in reviving economic growth.

Another effective measure of raising the revenue to fund the increased government investment is speeding up the process of disinvestment. This will not only give fiscal space to the government but also help boost confidence of the investors.

Taxation reform is also a critical area for reviving the economic growth. The Goods and Services Tax (GST) has not been implemented the way it should have been. This needs to be drastically simplified.

“When I look closely at the decline in the growth rate, the role of consumer non-durables is somewhat larger than we have seen before. Because the GDP data is not detailed, so if you match that with IIP data, the sectors of garments & textiles and processed foods are the ones suffering. Remember, this is IIP. So they are the formal sector, not informal. I have also looked at the rural wage data and real wages have actually been increasing for last 18 months or so at roughly 0.7 per cent per annum,” said Virmani

Direct Tax Code (DTC) is another area that needs immediate attention. While the government seems to be sceptical in taking immediate decision on the implementation of DTC given the experience with the GST, it is time that the direct tax reform must be pushed.

“Do the structural part of the DTC, which is essential. The tax rate part of it or the surcharges could be phased out in three-four years. DTC part is absolutely essential. It must be done in the ensuing budget,” said Virmani.

According to Virmani, the excessive focus on curtailing or dismantling the black economy had been a major factor behind the slowdown in the economic growth. Soon after taking charge Prime Minister Narendra Modi government set up a Special Investigation Team (SIT) in 2014 to look into the matter of black money. Then a whole bunch of laws, like Black Money Act and the Prohibition of Benami Property Transactions Act were modified or new regulations introduced. There were four-five major policy and legal changes culminating in demonetisation in November 2016. As a result, the black economy has been successfully suppressed, but it has not resulted in corresponding gain in the white economy. 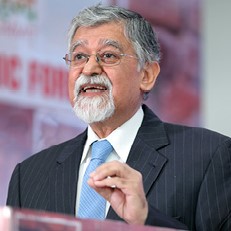 Arvind Virmani is a noted economist with expertise in macroeconomic policy, finance and international trade. He has been an adviser to the Indian Government at the highest levels for 25 years, including as Chief Economic Adviser, Ministry of Finance and Principle Adviser, Planning Commission. During this period, he advised on a host of economic policy reforms, as Chair of committees on Public Debt management and Customs duty reform, member of numerous committees and over a hundred policy papers and notes. He also served as Member, Telecom Regulatory Authority of India (TRAI) and the Appellate Tribunal for SEBI Act, Chairman, Board of Trustees of SBI Mutual Fund, and Director on the Boards of several financial institutions [LIC, PNB, Allahabad Bank and UTI (Trustee)].