Under the leadership of Prime Minister Modi, we are seeing the concrete results of his efforts. Increasingly, agriculture is not found to be remunerative any more. In order to look for education and employment, people are migrating to cities. This trend is disturbing the cities too. During these times, it is only appropriate that we enable the villages with all kind of facilities that provide more and more employment opportunities. Rural roads have been at the heart of providing access to markets.

Under Prime Ministership of Atal Bihari Vajpayee, NDA 1 government introduced path-breaking schemes like Fasal Bima and Pradhan Mantri Gram Sadak Yojana (PMGSY). I was the State Minister of Rural Development in Madhya Pradesh and had the opportunity to roll-out PMGSY at the state level. Based on MGNREGA, in the state, we envisaged its sub-scheme called Kapil Dhara Yojana. Under this scheme, we targeted to dig wells in the villages across the tribal belt of the state and make tribals the owners. This brought about positive change in their lives.

Under PMGSY, Vajpayee had envisioned to accomplish building the core network by 2007, which has remained incomplete even till date. The target is to complete this now by 2019. This is why we have accelerated the construction of rural roads to 130 km a day, up from 70 km a day few years ago. And the best part is that we are using modern technologies and expertise to construct the roads—no compromises are being made. To make things transparent, we have also introduced ‘Meri Sadak’ app, which has already been downloaded by over 4 million people nationwide.

In my opinion, Awas Yojana, as envisaged decades ago, failed to deliver to the expectations both in terms of implementation and scale. In 2014, when NDA formed the government, I had suggested that Prime Minister should focus on fixing up a timeframe by which all the people living in this country should have a house of their own. I am happy to submit that Prime Minister Modi has increased the outlay and fixed the end date for all to have a shelter by 2022. This has resulted in all the work being done at a fast pace to meet the target deadline. By 2019, one crore people will be provided housing under the scheme. We are providing funding for each house by provisioning a grant of Rs 120,000 from the budget; Rs 18,000 from MGNREGS wages; and, Rs 12,000 to build toilets. These houses are designed to have all amenities like water and electricity. The Ujjwala Yojana will soon be linked with this appropriately and will also be provided free electricity under Deendayal Upadhyaya Gram Jyoti Yojana wherein all the villages and households will be electrified. Availability of power will also help improve the agriculture yield. All new houses will be geo-tagged and linked with identity.

SKOCH has been working for decades to identify and encourage best practices and bring them to a national platform and for that matter it has been sharing this knowledge, providing new impetus and infusing new energy into such initiatives.

Not just roads, houses and employment opportunities but also the knowledge about felt-needs, best practices and successes that have scaled are the ones, which will help bring about the change. We are committed to bringing about this change in the rural landscape and rural living. Together, we shall create a Naya Bharat to realise the dream of our Prime Minister. 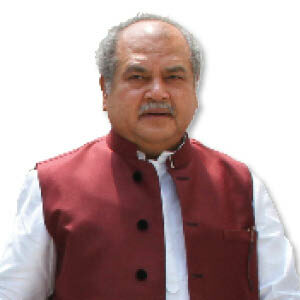 Sh. Narendra Singh Tomar is a leader of Bhartiya Janta Party and the cabinet Minister of Rural Development, Panchayati Raj, and Mines in the Modi's Government. He contested an won from Morena constituency in Madhya Pradesh by a margin of over two lakh votes.