India is a capital scarce country. There is huge unemployment. Providing gainful employment to the growing population is one of the biggest challenges facing the country today.

Micro, Small and Medium Enterprises (MSMEs) play a critical role in the economy. It provides employment to over 10.6 crore people, accounts for 45 per cent of the country’s industrial output and 40 per cent of exports. There are 4.6 crore MSMEs in India and these contribute 8 per cent to the country’s GDP.

There is huge potential to expand MSMEs in the country. Globally, MSMEs have been the engine of growth. Small industries have played a pivotal role in development of most of the economies globally. Contribution of MSMEs to major global economies range between 25-60 per cent. Compare this with India, where it is just 8 per cent. So the potential is huge.

Realising this fully well Prime Minister Narendra Modi has taken a number of initiatives to expand small industries. Initiatives like Make in India, Startup India, Standup India, Digital India and Skill India are targeted at supporting small businesses. Through these initiatives the government provides all kinds of support, be it financial or technical to help expand small enterprises. There is a lot of emphasis on modern technology to make system more transparent.

Doing business in India used to be really tough. It was especially very difficult for small entrepreneurs. We have taken a number of initiatives to cut red tape and make the process transparent.

We have removed red tape by allowing self-declaration. Now an MSME can self-certify its existence, bank account details, promoter/owner Aadhaar details and other minimum basic information. Udyog Aadhaar can be filed online at Udyog Aadhaar web portal maintained by the Ministry of MSME. There is no fee for filing Udyog Aadhaar Memorandum.

In order to provide a simpler and faster mechanism to address the stress in the accounts of MSMEs and to facilitate their development, we have notified a ‘Framework for Revival and Rehabilitation of MSMEs’. Under this framework, any enterprise can seek revival and rehabilitation benefit through a Committee constituted by the banks with representatives of state governments, experts, regional or zonal head of the bank and the officer in charge of MSMEs credit department of the bank. RBI has issued the revised Framework in consultation with the Ministry of MSME on 17 March 2016 to the banks.

Government has decided to relax the norms for Startup MSMEs. According to the decision, if the MSMEs can deliver the goods and services as per prescribed technical and quality specifications, the norms on prior experience and prior turnover will be relaxed for them. This will help the Startup MSMEs to take part in the mandatory 20 per cent public procurement from MSMEs. The relaxation has been made to create a conducive environment for the startups in India, which is high on the agenda of the government.

Khadi played very important role in India’s freedom struggle. Charkha, which is used for making Khadi clothes, was considered a change agent. Today, the conventional Charkhas have become outdated. It requires a lot of hard work and the output is very low. This led to exodus of artisans from the sector. We are now using solar technology to power Charkhas. Solar Charkha is a big technological innovation. It will revolutionise the Khadi sector. The output of Solar Charkhas is at least three times higher than the conventional Charkhas. This means, with the same effort and time an artisan can earn three times more.

However, there were resistances. Initially, when I talked of introducing Solar Charkhas, our bureaucrats said it can’t happen because it is contrary to Manatma Gandhi’s idea. But we have to update technology. Had Gandhi ji been alive today, he would have also used modern technology. I am sure he would have used mobile phones and computers to bring changes to the wider section of the society.

Charkha pushed forward by Gandhi ji was a tool of empowerment. Solar Charkha is a technology innovation. It enhances the relevance of that tool of empowerment. If we manage to provide Rs 6000-9000 income in villages, it will be a big revolution. Solar charkhas have the capability to do that.

Our target is to provide employment to five crore people through Solar Charkhas. We are pushing for the use of Solar Charkhas across the country. The objective is to employ one lakh women in each Parliamentary constituency and cover them under social security schemes. We also target to increase Khadi sales to Rs 1 lakh crore in near future from the current around Rs 26,000 crore.

Prime Minister Narendra Modi mentioned the success of Solar Charkha in his radio programme ‘Maan ki Baat’ in January. In fact, he gave an example of Sadhna Devi from my Parliamentary constituency Nawada in Bihar. “Those using a solar charkha have been sending me lots of letters. Geeta Devi and Komal Devi of Rajasthan and Sadhna Devi of Nawada in Bihar have written to me saying that their lives have changed drastically because of the Solar Charkha. They say their income has doubled,” Prime Minister said in the ‘Mann ki Baat’ programme. The Prime Minister pointed out that due to use of solar technology in Charkha the physical labour has gone down and production has increased brining a qualitative change in the lives of artisans. The mention of Solar Charkha by the Prime Minister in ‘Mann ki Baat’ programme has given a big boost to the initiative and we are hoping that we will achieve our targets sooner than expected.

Micro Units Development Refinance Agency (MUDRA) has given a boost to refinance operations for small business in the country. Pradhan Mantri MUDRA Yojana (PMMY) was launched in April 2015. In January this year, the government created a Credit Guarantee Fund for Micro Units Development Refinance Agency (MUDRA) loans. MUDRA Ltd, which was set up as a corporate subsidiary of SIDBI in March 2015, has been converted into MUDRA Small Industries Development Bank of India (SIDBI) Bank as a wholly owned subsidiary of SIDBI.

The MUDRA (SIDBI) Bank is involved in refinance operations and provide support services with focus on portal management, data analysis etc apart from any other activity entrusted/advised by the Government of India. The Fund is expected to guarantee more than Rs 100,000 crore worth of loans to micro and small units in the first instance.

In the past two years several initiatives have been taken to promote MSMEs. However, the challenges are huge. We have taken a number of steps towards ease-of-doing business. The success of Make in India initiative also depends heavily on the MSME sector. Several of the challenges are related to states. We are engaging with the state governments to address
those challenges.

Expectations are high! Make in India programme talks of promoting Brand India. It seeks to boost manufacturing, especially the MSME sector. It will make India a global manufacturing hub. Manufacturing is the only sector that can absorb the growing workforce in the country. The government is working tirelessly to boost investments in manufacturing by making doing business easier. Gandhi ji was a votary of village and small industry. The initiatives like Make in India, Digital India, Startup India, Standup India and Skill India are targeted to help small industries. All these initiatives have one underlying theme—to make India a manufacturing hub driven by innovation. These initiatives would help create India of Gandhi
ji’s dream. 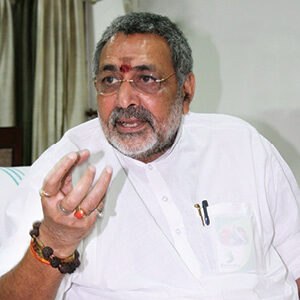 Giriraj Singh is an Indian politician and the Minister of Animal Husbandry, Dairying and Fisheries in the 23rd Ministry of the Republic of India. He is the Member of Parliament from the Begusarai parliamentary constituency in the 17th Lok Sabha, and formerly served as Minister of Cooperative, Animal Husbandry and Fisheries Resource Development in the Government of Bihar. 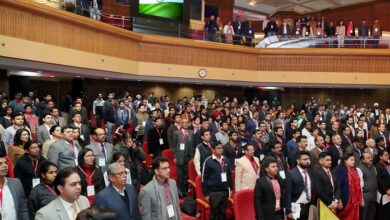 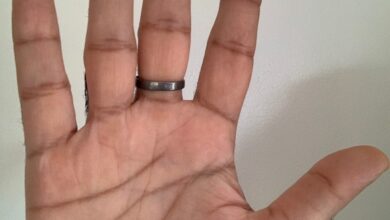 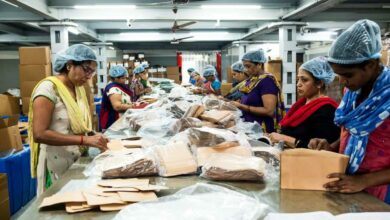