If we introspect the 25-years of economic reforms that started in 1991, I would say that there has been an erroneous debate, which is generated by some who think that the whole debate is between: are you pro-reform or are you pro-poor? The subject itself and the question, which is raised in this debate is wrong. One will never get the right answer, because the question itself is erroneously framed. I say this because we have seen the kind of economic activity, understandably, during the 1950s and 1960s, where obviously resources were inadequate and we had to make best of it. But, let us not forget, what kind of economic planning led us to right till about 40 years after Independence that we were growing by a paltry 2-2½ per cent. The world was ridiculing us as well as the Indian economy; wherein its growth used to be referred to globally, as the Hindu rate of growth. So, anybody who grew slowly and was satisfied with those inadequate levels of growth, used to be sarcastically referred to as the Hindu rate of growth. The available economic literature from those days used this as a taunt, which was repeatedly hurled on India.

Yes, the years after 1991 were the defining moment for India. It was India’s misfortune that what happened in 1991, really should have started at least 20 years before. Had it started earlier, the 1970s and 1980s would not have been the wasted decades as far as the Indian economy is concerned. A lot of retrograde movement took place particularly in the 1970s and you had all kinds of odd ideas, which came to mind but the ultimate objective was to have a restrictive regime that does not let you concentrate on increasing your productivity. Restrictive to the extent that you don’t concentrate on further generation of wealth so that wealth could be equitably distributed but only on distribution of existing resources, which were already inadequate. Distribution of that inadequate resource actually was contributing to socialising poverty in India and distributing poverty rather than allowing individual energies to be unleashed where people could grow much faster. If India has potential to grow now, it had potential to grow then as well; only the energies were to be unleashed and capacities unshackled that actually happened post-1991 only.

I would say, full marks to Narasimha Rao for kicking-off liberalisation, initiating the reforms and also for having had the courage to continuously stand behind the process. It did appear, at least a few years ago, nobody had doubted the wisdom of the thought process and steps taken in 1991. But in recent years, the nation has given into a preference for slogans rather than growth. Once again, the focus drifted from growth and increasing productivity to redistribution of existing resources.

Fortunately, the good sense has prevailed and this deviance has been corrected. The realisation has dawned that, if we have to grow, we must continue to strive for reforms, come what be. It is only when you grow and grow faster; you are able to pull up a lot of people from the clutches of poverty. But this is not enough; you are then able to use the increased resources that the government is able to put together, to start a whole lot of poverty alleviation programmes and concentrate on increasing investments in the states and public goods targeting those areas where pits exist and need filling up – no quick-fixes, but sustainable solutions.

The best response to poverty elimination is to grow faster so that we have more resources in order to serve more and more people at the bottom of the pyramid and provide them social security. The real idea behind what happened in the last 25-years was precisely this; and this is the objective of the Modi government too.

An example here is Pradhan Mantri Gram Sadak Yojana (PMGSY) that was started during the time when Atal Bihari Vajpayee was the Prime Minister and M Venkaiah Naidu was the Rural Development Minister. I am glad that successive governments continued to push for this programme. Over a period of time, connecting rural habitations have reached multiple benefits to the villages, i.e., access to markets, healthcare, education, connectivity with other villages and public transport. Undoubtedly, this has led to rural development and reduction in rural poverty. This connectivity has changed the face of rural India. This year, we have increased the budgetary allocation to PMGSY to Rs 19,000 crore as against Rs 15,100 crore in 2015-16. If we continue the momentum, over the next few years connecting each and every village in this country will become a reality. Several Members of the Parliament have said in the house about the efficacy of this programme as it has given rise to rural aspirations and increased their incomes.

An impoverished government strapped for funds can never do that. It is only a government with resources, which can not only dream but also implement policies towards the long-term goals. Therefore, when the economy grows faster, people get more jobs, new opportunities are created, more wealth is generated, more people come out of abject poverty and then a resourceful state is able to introduce a slew of anti-poverty measures. In nutshell, surplus resources can be used to fight the menace of poverty.

So, let alone there being a choice between reforms vs poverty, the best response to poverty elimination is to grow faster so that we have more resources in order to serve more and more people at the bottom of the pyramid and provide them social security. I am sure, the real idea behind what happened in the last 25-years was to move in this direction and also to complement each other. This is precisely the objective of the Modi government, which is our guiding philosophy and there is widespread acceptability of the same across all domains.

There are challenges, true, but then there are a few strengths also. During the years immediately after 1991, there was a fear of the unknown. Today, a large section of people have benefitted from reforms and therefore, people being aware of sustained impact of reforms, the constituency that supports reforms is much larger in size compared to the obsolete thinking of the past. This is one of the greatest strengths of today’s India.

The realisation is there that it is our turn to grow. India, as a very fast growing economy, can do better. Today, when the world faces a challenge, we may take solace in the fact that we are the fastest growing large economy. But at the same time, compared to our own real potential, we have also to concede that we can do much better. Therefore, the idea is to continue on this track to grow faster to add to reforms and to ensure that the benefits of the reforms go to the Indian villages, to the economically disadvantaged and used for infrastructure creation. There is no other way but to continue this path of growth.

(Arun Jaitley is Finance Minister. The views and opinions expressed in this article are personal and do not reflect the views of INCLUSION.) 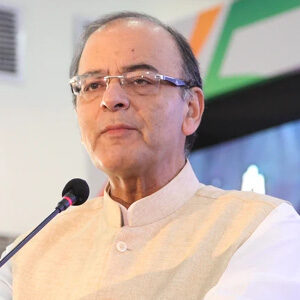 Arun Jaitley, (born December 28, 1952, New Delhi, India—died August 24, 2019, New Delhi), Indian lawyer, politician, and government official who served as leader of the Bharatiya Janata Party (BJP) in the Rajya Sabha (upper chamber of the Indian parliament) in 2009–14. In 2014 he joined the cabinet of the BJP-led government of Prime Minister Narendra Modi. Jaitley was known as an eloquent speaker, and his political and professional career was largely noncontroversial.