The 12th Five Year Plan aims to attain 8 per cent growth with equity. As far as the target is concerned, the first year of the Plan has been quite disappointing, and we could achieve only 5 per cent growth. There is excessive pessimism about the fact that growth has slowed down last year. In any economy there are ups and downs because of global factors and domestic policies. Sometimes domestic policy may not have understood how big the challenges are but it is very rare that an economy that is growing at a certain pace for a certain number of years suddenly slows down and that the slowdown can’t be corrected.

Many people think that the high growth was partly because during that period the global economy was booming. About the global economy, nobody is predicting an encouraging picture. We used the Hodrick-Prescott Filter statistical technique to figure out what might be seasonal or temporary ups and downs and found that over the last 10 years, the trend growth rate that comes out is 7.4 per cent.

When we talk about policy, our assessment is that in the course of last few years with very rapid growth and also a tremendous build up in investment, the economy ran into a certain number of policy bottlenecks that need to be solved. The government is working to solve them.

To attain 8 per cent growth in the Plan period, the policy changes that are required can be categorised into three subsets. The first and in many ways a precondition for any kind of successful economic performance is to make sure that the macroeconomic balances are fine. The second and third are government programmes and policies.

The aim is not just 8 per cent growth, but inclusive growth. A lot of government programmes are aimed at inclusiveness and they also feed into the growth process. Yet, we must remember that our economy is now dominated by private sector enterprises. About 75 per cent of the investment in the country is made in the private sector and that does mean not just the corporate sector. It also includes the small-scale enterprises, unorganised business and farmers. These whole groups of economic agents who actually do investments are responding to policies.

First, the central government’s tax-to-GDP ratio has to rise by 2 percentage points over the Plan period. The fact is, the ratio has been falling for a variety of reasons. The losing tax revenues as a ratio of the GDP remain a big concern. Through better administration and more efficient tax system that follow a simplified rate structure, it is very much possible to get 2 per cent increase in the tax-to-GDP ratio. One of the very important contributors to this would be the movement towards the Goods and Services Tax (GST). The shortcoming in tax revenue is almost entirely due to indirect taxes. Direct taxes are not a cause of problem.

The second major improvement that is needed relates to subsidies. As percentage of GDP, they have risen quite a bit mainly because of the petroleum subsidy. The 12th Plan targets that subsidies as a ratio of GDP should decline by one percentage point from about 2.3 to about 1.3 or 1.4 per cent. The rationalisation of subsidies is an imperative need.

It is extremely important to implement the 12th Plan suggestions to align the domestic energy prices with global prices. Major progress on the issue of macro balancing has been made through rationalisation of subsidies on petroleum products. Similar action is desirable in other areas, too.

As far as states are concerned, exactly the same logic applies to electricity pricing. The most important macro balancing decision that the state governments have to take is the introduction of a rational system of electricity pricing. As a result of the initiatives taken by the government to open up the power sector for private investment, there had been a quantum jump in the generation capacity. Oddly enough, a key reason for fuel supply problems is the massive increase in the generation capacity. Fuel is freely importable despite the fact that imported fuel is much more expensive than domestically-produced fuel. Basically nobody is willing to absorb the higher costs of imported fuel.

So, proactive management of the energy resources — particularly coal and gas — is needed. If there is no effort to align the prices and we import at a higher cost, electricity prices will have to rise and that is going to be politically resisted. It is going to be difficult but through better awareness, we could carry out this vital reform.

The distribution of electricity and prices paid by consumers are under the control of state governments. There is nothing that the Centre can do on this. Unfortunately, this message has not gone across adequately. In broad terms, the roadmap for better energy management is laid out in the 12th Plan document.

It is extremely important to implement the 12th Plan suggestion to align the domestic energy prices with global prices. Good progress on the issue of macro balancing has been made through rationalisation of subsidies on petroleum products. Similar action is desirable in other areas too

Gas is another example. It is domestically priced at $4.25 per billion BTU and the imported gas rate is $13. It is extremely difficult to manage a situation where the key inputs are so distorted. To handle the whole energy crisis, both central and state governments have to share a common understanding of the problem.

In many ways, water faces serious resource-based problem than energy and the reason is that property rights — the understanding that you have to pay for its use — is much better understood in the case of energy than water. On water, it is not even clear who has the property rights over it. Often water termed a common property resource but that is not what the law says. One can extract any amount of ground water at will from a hole in the ground and there is no system in place to check its plunder. As far as pricing is concerned , the distortion in water pricing is even greater than electricity.

Water scarcity is not going to be solved merely by having a price solution. Setting up a water regulatory authority in each state could solve the whole issue of water regulation. The transition to an effective management of water is probably a 10-15 year problem. As of now, even ideation has not started off about it. So this is a very important long-term issue that requires swift attention.

A colossal structural change is happening with urbanisation. India is becoming much more urban-centric. It creates economies of agglomeration which enable the economy to benefit from the notion that urban areas are growth engines, which the Chinese experience clearly shows.

This is a huge challenge and quite honestly, it is entirely a challenge in the realm of state governments because given India’s federal structure, the central government deals with states and states actually deal with whatever happens at the urban level. In most of states, urban areas have abundant facilities and services that rural areas don’t have. Therefore, from the inclusiveness point of view, the focus is that government money should go to rural areas for development. But it should be remembered that we cannot manage modern urban societies without urban services. The real lesson is that the urban services must be paid by urban residents.

Can these issues be addressed when 90 per cent of the initiatives lie with state governments? It is not happening on a scale that would make people say India is really responding to its urban challenges. Nevertheless, whenever somebody responds somewhere, very good results are obtained. But the scale of that response is not adequate. So, central and state governments need to address this issue properly during the Plan period.

One of the big positives about India other than the fact that it has high savings rate is the demographic dividend. India has a sizable young population. In the next 20 years, the labour force in China is going to decline. The same will happen with the developed world. This is an advantage we could leverage only if our labour force is skilled. They must have not only the university degrees but also employable skills.

In recent years, the venture capital fund industry has been flourishing in India. It is still small but 10 years ago, it wasn’t even there. The question is, 10 years later, will it become much bigger or will it grow at just 10 per cent per year? Some positive action in these area will unleash an entrepreneurial dynamism in the country; and it will contribute an extra 1 per cent growth to the Indian economy. The long-term trend of 7.4 per cent could go down to 6.9 per cent because of the global economy and if India can add another 1 per cent because of all these policy improvements, then the economy would be back to 7.9 per cent.

Through better administration and more efficient tax system that follow a simplified rate structure, it is very much possible to get 2 per cent increase in the tax-to-GDP ratio

That is the 8 per cent scenario. If there is going to be policy logjam, the rate will end up with 5-5.5 per cent growth. If we get some progress but not enough, the number will be 6-6.5 per cent.

Now no revision in the Plan target is envisaged because these things take place at the time of mid-term appraisal, which will actually be happening the new government is in place post the general elections.

But it is certainly true that on the 8 per cent growth front in the first year, the economy has lost some momentum. Yet, there is absolutely no reason to think that the Indian economy will not grow somewhere between 7.5 per cent and 8 per cent over the Plan period. 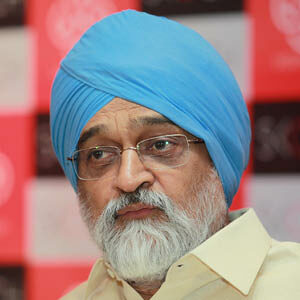