Reforms have to start grassroots level upwards. Sometimes, I feel that I am not a member of Parliament; rather, I am the chief grievance officer of my constituency because the people have nowhere else to go. They come to me with their legitimate grievances because the administration at the lowest levels will not give them a hearing. They are not even accessible.

We have municipalities, corporations and rural bodies but these bodies have become dysfunctional as they have not been given powers and resources to implement whatever authority have been devolved to them. For instance, under the MGNREGA, there is a mandatory provision that each Gram Panchayat will prepare and implement a five-year plan. I asked in my districts (two districts form part of my constituency) whether these plans had been prepared. They had been prepared in 2008 and they are expiring this year. In one district, they were able to find the book; in the other, they couldn’t even find it. I chair the vigilance and monitoring committee meetings at the district level in which the government of India schemes are reviewed. When I asked the Block Development Officer how many MGNREGA schemes were going on in his block, he had no answer. This is the quality of administration we have in our districts. When I was a Sub-Divisional Officer and a District Magistrate, we had to spend 10 or 12 days in a month in rural areas as part of work.

The people in the villages know what they want. All that the government has to do is to make sure that the Gram Sabhas are able to make a development plan after democratic consultations. I visited South Korea after it was devastated by the war in the Korean Peninsula. It was that time the South Koreans started a movement called Saemoul Undong. Under the rural development plan, they had a village headman, the parallel of our Gram Panchayat, an executive committee and a village fund. Outsiders were deputed to local bodies to hold the council meetings in order to prepare a village development plan according to priority. The priority may be roads, healthcare facilities, electricity, drinking water, irrigation, schools or any other. Then the money allocation issue was discussed and settled. The heart of the matter is, after prioritisation and funding assessments were finalised, it was so simple to implement any development plan. After completion, project reports were scrutinised. Under Saemoul Undong, each village took up some projects in the first year, some others in the second, many more in the third and so on. In a systematic manner, the basic development needs of a rural area could be resolved in a short span.

This experiment incentivised healthy competition among village communities: those with honest leaders had better achievements to their credit. This created a bottom-up approach both for planning, reform and personal integrity. The whole idea is so simple and I believe India has plenty to learn from this experience.

About pricing of natural resources, I will say that anything that is for a social purpose should have an administered price. When a municipality supplies water, it should have a subsidised price for domestic use, but wherever there is a commercial purpose, it should be auctioned and market price should be realised. You can’t have really free market pricing if you don’t have competition. This is what we learnt from liberalisation exercises in civil aviation and telecom sectors. There the rates have come down because of competition and efficiency. When we were in the government, we deregulated petroleum retail and encouraged Reliance and Essar to come in with their outlets. Now they are closed. Billions of rupees invested in retail outlets have gone waste because the government took upon itself regulation of petroleum products pricing.

We have municipalities, corporations and rural bodies but these bodies have become dysfunctional as they have not been given powers and resources to implement whatever authority have been devolved to them. For instance, under the MGNREGA, there is a mandatory provision that each Gram Panchayat will prepare and implement a five-year plan

The direct benefits transfer (DBT) is the right answer provided we have the courage to implement it for all subsidies. Right now, it covers only those areas where such benefit was going to the bank account in any case. Indira Awas Yojana, social sector pensions, MGNREGA wages and scholarships were in anyway going to the beneficiary bank account. The government had to quickly withdraw kerosene from the list because for kerosene you don’t even need a card; you just queue up and get whatever is the quantity allotted to one household. So it has not worked for kerosene, fertiliser, food or for petroleum products.

We need to immediately stop the government expenditure from bloating. Expenditure management and emphasis on quality expenditure should be the theme and for this we will have to work in a very determined way. I dismiss the present classification of Plan and non-Plan expenditures and revenue and capital. The whole emphasis should be more and more on productive expenditure. We have to take a conscious view of subsidies and the proper targeting of subsidies. This is where the DBT scheme becomes important. But the government must not do it through the Aadhaar card; it must do it through the National Population Register.

When we ran the government, we had every other institution apart from the right to information. We had the CAG, CBI, the Ministry of Environment and Forests, among others. Yet, we were able to go ahead. Land acquisition problems have always been there but why have these multiplied suddenly?

India produces 250 million tons of foodgrain and still the food inflation is double-digit. There are 80 million tons of foodgrains in our godowns. The government is not releasing it because it wants to keep this grain for the Food Security Bill. That is not fair. Moderate food inflation will have a benign impact on all other kinds of inflation. Then once you have created the space for the RBI to reduce interest rates, the investment climate will improve dramatically. Then automatically, the current account deficit is taken care of.

The macro-economic picture today is bleak with high fiscal deficit, inflation and interest rates. Important sectors like telecom, power, civil aviation and railways, are all distressed. If I were in government, I would declare that we would build 30-km of national highway per day. I will find money to double the capacity creation of Pradhan Mantri Gram Sadak Yojana (PMGSY). I will announce that we will start with the river-linking project. I would have said that we will build 100 airports in smaller places via public-private partnerships. The government can do a whole lot of things in various sectors. The result will be moderating interest rates spurring activity in the economy. Finance Minister P Chidambaram in his budget speech talked about new avenues of financing infrastructure. However, the key issue is implementation and approvals.

When we ran the government, we had every other institution apart from the Right to Information Act. We had the CAG, CBI, the Ministry of Environment and Forests, among others. Yet, we were able to go ahead. Land acquisition problems have always been there but why have they multiplied suddenly? They have, because the crux of the problem today is weak leadership in government. You can’t have a Prime Minister who does not have political clout.

Centre-state dialogue is another distress area. The National Development Council (NDC) and the Inter-State Council (ISC) are there. There are provisions in the Constitution and there is the Planning Commission route. The ISC is a constitutional body and a lot of work can be done through it. We should have at least one NDC meeting every six months, instead of one in many years. This should improve Centre-state relations. 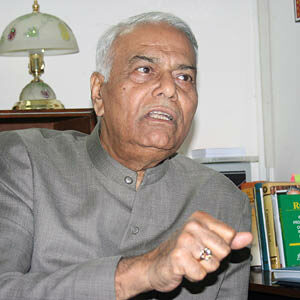 “A Paradigm Shift in Skill Development is the Government’s Aim”

The Challenge is at the Grassroots