The government is implementing the direct benefit transfer (DBT) programme for 26 schemes in 43 districts in the country now and is planning to expand the size and scope of it. The whole strategy and architecture of direct benefit and cash transfers were to create a platform through which the government could transfer money for social welfare schemes or subsidies directly and unambiguously to the intended beneficiary. We have millions of beneficiaries and therefore, the big question is, how to build highly scalable technology-based infrastructure to make sure that the benefit reaches the right person?

There are multiple components to this question. One is we have the Aadhaar number, which is essentially a unique ID. It is a number assigned to a person so that the individual can be correctly identified in an online environment. We have issued Aadhaar numbers to 340 million people so far. To operationalise the DBT, bank accounts are needed in order to integrate the Aadhaar system with the banking system. A mapper system maintains the relationship between the Aadhaar number and the bank where a DBT beneficiary has the account. This mapper is maintained by the National Payment Corporation of India (NPCI), a company set up by banks and the Reserve Bank of India (RBI) to be the agent for all retail payments like ATM networks and pass networks. A person’s bank account and the Aadhaar number are linked through a process called seeding.

The whole platform can be used for different kinds of things, but broadly, there are three. One is direct cash transfers into bank accounts for schemes like scholarships, pensions, Mahatma Gandhi National Rural Employment Guarantee Scheme (MGNREGS) wages and so on. The second is direct benefit transfer to pay subsidy money for goods like LPG cylinders, food and fertiliser. Third, it can also be used for conditional cash transfers where the government pays certain amounts of money based on the school attendance of the child and so on.

Targeting the beneficiary accurately is what Aadhaar does. For instance, we have social welfare schemes like old age pension, disability pension and widow pension. Different departments at the state level or district level maintain these lists of beneficiaries. But the lists are infested with duplicates and ghosts and to eliminate them, the Aadhaar number is the key. Let’s say there is a list of 10,000 pension beneficiaries, but when the Aadhaar number is verified, the number of genuine persons in the list might come down to much less, say, 7,000. The savings for the government is huge when fraud and wastage are tracked and tackled.

Basically, we have a platform, which allows the government to transfer money to millions of people because the whole system is highly scalable, traceable and accountable. When the DBT is expanded, every day you may have millions of transactions and they all go electronically from different departments directly into bank accounts. Currently the money has started going into people’s accounts using this technology wherever the DBT programme is being implemented.

The Aadhaar-based platform solves five problems. First, it cleans government databases of duplicate or non-existent names. Second, it eliminates fraud and makes sure that the money goes straight into the bank account of the beneficiary. Third, the Aadhaar card being a KYC allows a person to open a bank account. Fourth, the authentication at the micro-ATMs allows people to withdraw money from anywhere. And finally, the entire transaction is traceable. So you have a high level of accountability, traceability and transparency built into the system

Then comes the question, how do people take money out of their accounts? Obviously they can go to the bank branch or an ATM. However, to make transactions ubiquitous, we need some kind of a low-cost banking model which allows people to do business from anywhere in the country.

The RBI and Ministry of Finance has been actively promoting Business Correspondents (BCs) who are essentially agents of a bank from where people can conduct banking business without pain. They can be employees of a bank, self-help groups, Anganwadi or ASHA workers, grocery stores or petrol pumps as long as three conditions are complied with — they need to be attached to a bank, which appoints them and they need to have an online device connectable to the banking network. Historically BCs have been dedicated to one bank or one village.

But what we have now done using the Aadhaar authentication is create the ability to have an interoperable network of BCs who do online verification of identity anywhere in the country. Beneficiaries can withdraw money (or deposit it) even if the account is in a different bank from that of the BC with whom they are transacting. It is very similar to an ATM network. This online interoperable network is getting rolled out both with banks and post-offices. BCs carry a hand-held biometric device called the micro-ATM. When the DBT puts money into a person’s bank account, the whole transaction — from authentication to money transfer through the interbank switch of NPCI — takes less than a minute.

Fundamentally, the Aadhaar-based platform solves five problems. First, it cleans beneficiary databases of duplicate or non-existent names, thereby reducing the chances of wastage. Secondly, the Aadhaar number eliminates fraud and makes sure that the money goes straight into the bank account of the beneficiary. Thirdly, the Aadhaar card being a KYC allows a person to open a bank account. Fourthly, the Aadhaar authentication at the micro-ATM allows people to withdraw money from anywhere in the country. And finally, the entire transaction is traceable from end-to-end. So you have a high level of accountability, traceability and transparency built into the system.

This is what happens in the case of cash transfer, for example, on pensions and scholarships. What happens in the case of goods? Let’s take LPG for example. The government has a dual pricing system where a customer is entitled to nine subsidised cylinders in a year and at market price for additional ones. The market price of the cylinder is approximately Rs 900 and the subsidised price is Rs 400. However, the problem is that someone can get a cylinder at Rs 400 and then sell it to somebody at Rs 900. To make the system fraud-proof, the government has to ensure that all the cylinders are sold at Rs 900 and then the subsidy is paid as DBT for the first nine cylinders. The beneficiary will get Rs 500 into the bank account using the electronic cash transfer within 48 hours of buying the cylinder. This allows the market price to prevail and stops diversion. It also allows the companies, which are selling LPG to operate in a market mode because the subsidies are paid electronically. The same principle could be applied to food, fertiliser and other goods. It is unique as it generates an auditable and transparent electronic trail. It is important strategic intervention as it helps the government to streamline benefit delivery. 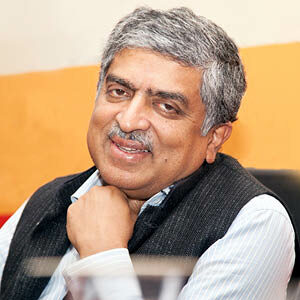 Nandan Nilekani was until recently Chairman, UIDAI Based on his address during release of festschrift, ‘Growth and Governance: Essays in honour of Nandan Nilekani

The Challenge is at the Grassroots