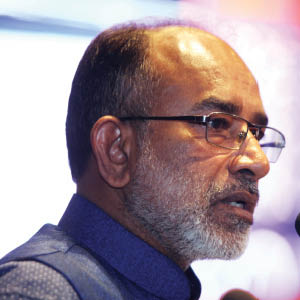 Alphons Joseph Kannanthanam or K. J. Alphons (born 8 August 1953) is an Indian civil servant, advocate, and politician from Kerala. He is the former Union Minister of State for Culture, and Tourism, in office since 3 September 2017 to May 2019 under the B.J.P. Government of Narendra Modi. He is currently serving as a Rajyasabha MP. He is the second BJP Central Minister from Kerala after O. Rajagopal. Alphons Kannanthanam belongs to the 1979 batch of the Indian Administrative Service (I.A.S.), Kerala cadre. He served as Commissioner of the Delhi Development Authority.